Boetti is an autodidact. Pavese, Montale, Mann, Faulkner and above all Herman Hesse (whose complete works he read) were some of the authors who meant most to him.
Turin at the time was a highly stimulating city with an international outlook, largely due to the Einaudi publishing house and certain other outstanding points of cultural focus, such as the Galleria Galatea run by Mario Tazzoli. Here the young Boetti discovered Tantric art. His initiation into contemporary art came at seventeen in Luciano Pistoi’s Galleria Notizie, where he saw watercolors by Wols, works by Fontana, paintings by Gorky and Rothko, drawings by Henry Michaux and discovered Cy Twombly in 1963 (a year also notable for Balla’s first major retrospective at the Galleria Civica).
In around 1960 AB painted a number of works in Art Informel style using oil or tempera on canvas or cardboard. “At twentytwo he did not yet see himself as a painter, but his vocation as an artist was not in doubt. His masters were Matisse, the Balla of the abstract exercises and watercolors, Wols and Nicolas De Stael, who he regarded as the Cesare Pavese of painting. But he believed the greatest was Paul Klee.”

“I actually first became interested in the exotic when I was fifteen, thanks to Paul Klee’s Moroccan watercolors. He was born on 16 December like me,and this made my adolescent identification easier. Very ingenuously, I had ‘copied’ those watercolors before I knew who they were by.” 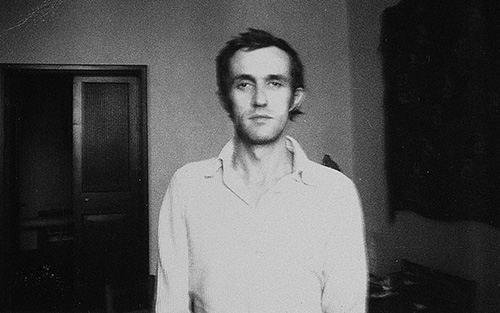 At the same time, to make a living he set up a business and ran it for some years. He had got to know Provence through Delfina Provenzali, a translator and friend of the poet André du Bouchet (Nicolas de Stael’s son-in-law). In the village of Vallauris he bought ceramics by Picasso and other artists and sold them in Italy. It was here that in 1962 he met Annemarie Sauzeau, a young English teacher, who became his wife in 1964; they remained married until 1987.