Boetti moved to Paris in autumn 1962 and stayed there for most of the next two years. He saw at first hand the abstract lyrical works of De Stael, the tactile works of Dubuffet and Fautrier, and calligraphic Zen painting from Japan in a historical exhibition at the museum of the Petit Palais. He discovered the concept of André Malraux’s multicultural “imaginary museum” through the famous book published by Skira (reprinted many times from 1947 on). He absorbed it to the point where he confused it with the later exhibition organized in 1973 at the Maeght Foundation on the same subject.

“There was also that exhibition organized by Malraux in Paris in the early sixties: the ‘Imaginary Museum’ or something of the sort… He had chosen the finest pieces from different museums all over the world, Sumerian art, Egyptian, Khmer sculpture… I clearly remember an Assyrian statue in white marble with eyes in lapis lazuli.” 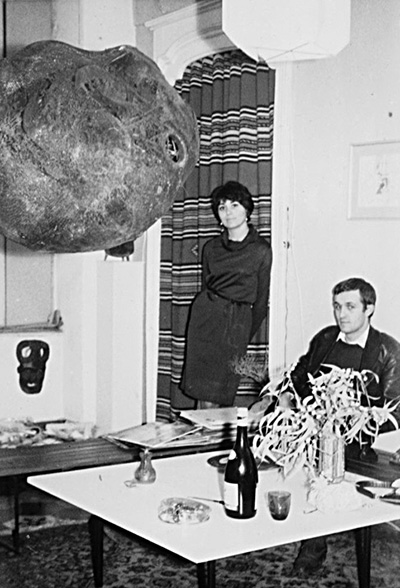 Lacking a studio, he concentrated on “chamber works”: drawings in India ink on kleenex and “combustions” of small boxes of matches, perhaps with an allusion to the Peintures-feu of Yves Klein, who had recently died in Paris (May 1962). In early ’63 he learned the technique of engraving in Johnny Friedlaender’s studio. Starting by using black ink he eventually developed a sophisticated polychromy. In the studio he also met the Cuban artist Ramon Alejandro, with whom he formed a close and lasting friendship. He read Marcel Granet and discovered the ideas of Gaston Bachelard. Piero Manzoni died aged thirty in Milan.
By autumn ’64 he had returned permanently to his apartment-studio on Via Principe Amedeo in Turin.
He still continued to do engravings, but his main focus was on large drawings in pencil on cardboard. 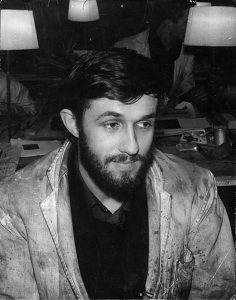 Alighiero Boetti at the Friedlander studio in Paris, 1963, photo by Annemarie Sauzeau Boetti

These works were subtly modulated from black to grey, as if they were engravings done with variable concentrations of ink. Unlike the early Parisian examples (non-figurative organic forms), he was now producing cold mechanical outlines traced using old Fiat engine gaskets or vaguely Pop comic strip imagery, with inscriptions similar to labels.
He also produced threedimensional objects, starting from scavenged pieces of sheet metal. He welded and spray painted them, leaving a “viewfinder” that traversed the chunks of metal.

“Among these objects suspended from the ceiling at the height of the eyes like a viewfinder, I can remember a piece of the bodywork of a van, with the side view mirror and the seat repainted a golden yellow.