On the art scene in Turin, AB tended to keep to himself. He produced numerous minimalist works. Some, in particular those using light installations which shortly preceded Ping Pong and Lampada annuale, were only exhibited between 2002 and 2003. Others, chosen by the dealer Christian Stein, formed the core of his first solo exhibition in January ’67.

“In the winter of ’65–66 I prepared an immense number of works and projects. By about May ’66, convinced it was impossible to use everyday practical objects, I tackled some new abstract works. They were lines on the ground, two flashing lights, a plexiglas panel suspended from the ceiling, some daises, sloping floors and even a well! There was still something of the theater in my need to put people in situations, even to amuse them.” 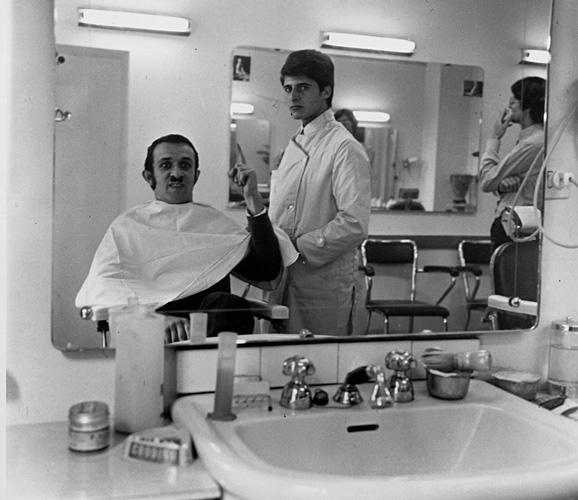 Alighiero Boetti with Giulio Paolini from the barber, photo by Anna Piva Paolini

This year AB began to frequent the avantgarde galleries run by Gian Enzo Sperone and Christian Stein, where he met some young Turin-based artists, including Mondino, Gilardi, Piacentino, Paolini and Pistoletto.

“I was on good terms with Pistoletto and saw Gilardi and Piacentino every so often, but we moved in different circles. Today, looking at things from a distance, I’d say everything came from that group. And Pascali, when he did the exhibition with the Cannons in ’66 at the Sperone Gallery, it was in Turin that he was most appreciated, and the same is true of Fabro.”

With Giulio Paolini, however, Boetti immediately formed a close relationship. Paolini himself recalled it in these words: “Alighiero and I met in ’66. There was immediately a special relationship, different from that between colleagues which I had with other artists from Turin. With him there was a friendlier and more confidential feeling, more open.”