“Knowing of innumerable events that happen without our participation and knowledge, because of the pure impossibility of space and time, I was prompted to make the Lampada annuale as a theoretical-abstract expression of one of the infinite possible events, the expression not of the event but of the idea of the event… While the Lampada annuale was a totally literary work, of Catasta, Tubi or Cartone ondulato, all I have to say is: it’s a stack, it’s a roll of cardboard pushed up from inside, it’s a bundle of tubes and so forth.” 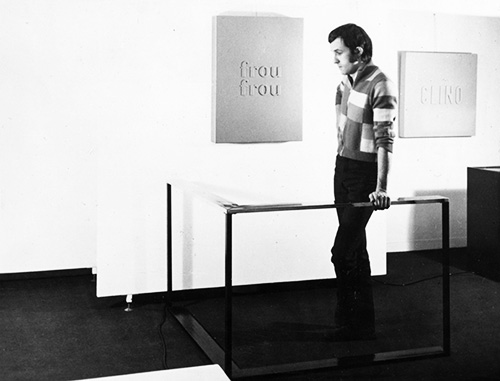 Alighiero Boetti at the Christian Stein gallery in Turin, photo by Paolo Bressano

In the profusion of ideas, gestures and objects of ’66, there was already an obsession with writing and two dimensions, with various panels devoted to language: stiff upper lip, the thin thumb, CLINO, frou frou.

All the more so in ’67 Manifesto was totally conceptual, and even the multiple Contatore. This first solo exhibition was reviewed by Tommaso Trini in two articles, in Domus (February) and Bit (March). Paolo Fossati reviewed the exhibition twice, in the journal Flash and the newspaper L’Unità.
In the spring following the exhibition, Boetti began what he called “panels of colors.” The raised wording, with a tautological effect, gave the name of the industrial color that had been sprayed across the surface as if it was a car body.

In this period he moved into a new studio, larger and brighter, on Corso Principe Oddone. Between the first exhibition at the Galleria Stein and his second solo show at La Bertesca in Genoa in December, he took part in all the early group exhibitions of Arte Povera in Turin, Milan and Genoa, especially “Con/temp/l’azione” curated by Daniela Palazzoli and held in the three Turin galleries Il Punto, Sperone and Stein, and “Le parole, le cose – Fluxus: Arte totale” held at the Galleria Il Punto and the Teatro Stabile. 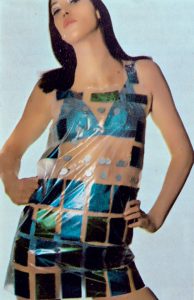 Dress designed by Alighiero and Annemarie Boetti, at the Pipier club, Turin, courtesy of Annemarie Sauzeau

In April Rotolo di cartone ondulato was added to the Museo Sperimentale d’Arte Contemporanea at the Galleria d’Arte Civica in Turin. Among the texts in the catalog, the essay “Situazione 67” by Germano Celant analyzed Boetti’s work in these terms: “The new monumental forms, instead of being made of natural materials—marble, granite or other types of rock—are made from artificial materials, steel, formica, plastic, plexiglas… Definitely more impressive and “present” are Boetti’s piles of tubes in masonite and in plastic, tactile aggregates of objects, on which the mere act of accumulation confers an independent and essential value, a sort of aesthetic register of elements in the pure state, a rejection of the  problem of form.”

On 16 May, AB took part, with Annemarie Sauzeau, Piero Gilardi and Elio Colombotto-Rosso, in a “Beat Fashion Parade” held at the Piper Club in Turin, designed and organized by the architect Piero Derossi.
The “collection” by Boetti consisted in clothes made from transparent colored plastic containing heterogeneous materials.
In June he began a work in progress, Formazione di forme. The first “form” was that of the territories occupied by Israel extending as far as Egyptian Sinai, which AB traced from the newspaper La Stampa of that date. This and the following geographic forms, recorded on paper, always dated and taken from the newspaper, were incised in ’71 on twelve copper plates with the title Dodici forme dal 10 giugno 1967.

In July he took part in the group exhibition “Confronti” at the Galleria Christian Stein. On display were works by Fontana, Klein, Manzoni, Fabro, Kounellis, Lo Savio, Merz, Mondino, Paolini, Schifano and Twombly. In the summer he spent a long period in the Cinque Terre: at his home perched above the sea in the village of San Bernardino between Vernazza and Corniglia, he experimented with the possibilities offered by polaroid shots of his own body, taking self-portraits in Gran bacino and entrusting the shot of San Bernardino to his friend the fashion photographer Robert Cagnoli.

27 September–20 October, Galleria La Bertesca in Genoa: group exhibition “Arte povera-Im spazio” curated by G. Celant. AB was present in the Arte Povera section with a new Catasta, made up of twelve pieces instead of the previous thirty-four. This was the actual occasion when the Celant coined the Grotowskian concept of “poor art.” Of Boetti he wrote: “… The mode of definition is reduced to the mode of acting and being. Hence Boetti’s gestures are no longer an accumulation, a montage, wooden joint and stack… So here we have ‘figures’: the Castata as accumulation, the joint as joint, the cut as cut, the stack as stack, mathematical equations of real = real, action = action.” Subsequently, in the article “Arte Povera, appunti per una guerriglia” in Flash Art, Celant returned to the subject and described Boetti as an artist who “reinvents the inventions of man.” 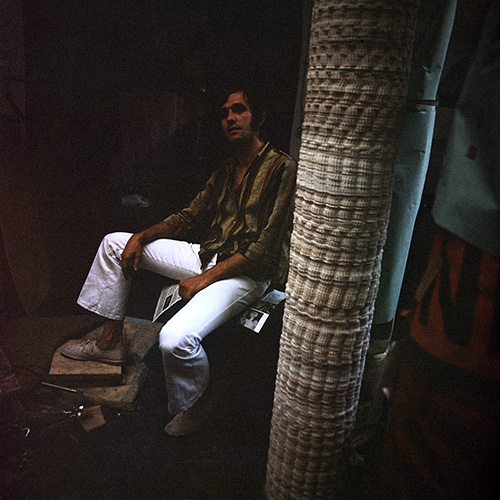 Alighiero Boetti in his studio in Turin, via Principe Oddone, photo by Mario Ponsetti, 1967

In December he had a solo exhibition at the same Galleria La Bertesca in Genoa, with new works, among which different versions of Mimetico and three-dimensional works, all reproduced in the catalog, the
first important publication to deal with AB. It contained farsighted essays by G. Celant, H. Martin and T. Trini. Thirty copies of the catalog were signed, numbered and accompanied by a drawing by the artist.

Other copies had four (six?) silk-screen prints in fifty copies: they were a posteriori industrial plans not only for the works exhibited but also other works like Rotolo (1966) and Catasta (1967). The prints were made by the Genoese art printer Rinaldo Rossi and marked the start of his continuing collaboration with Boetti. 1967 was also the year AB produced Dama (“Chechers”), a wooden checkerboard made up of movable blocks with various symbols punched on them, so they could be recomposed by pairing like with like as in dominoes.

With I Vedenti (“The Sighted”), a low relief in plaster, AB explored the significance of the sense of sight but garbled it by appropriating the language of the Other, of the blind. Finally there was Manifesto, a conceptual work which presented a list of sixteen Italian artists including AB himself: different combinations of symbols were associated with each name. The offset print was posted like a letter. Various farfetched interpretations have been put forward, but its meaning has never really been explained.