This was a year of socio-political ideological upheavals and conflicts, above all in Turin, an industrial city.

“People from outside Turin used to come and see for themselves what was going on… But essentially I never joined in a procession. Perhaps I didn’t even agree with it much, I wanted to think of my own things, which held all my attention.”

This year AB produced the “sculpture” Autoritratto negativo, the photo montage Shaman-Showman and finally a second montage Gemelli, which he sent to about fifty of his friends. From this double image he derived, in 1971, his new signature “Alighiero e Boetti.” On 7 February, he had his second solo exhibition at the Galleria Stein. The opening was recorded in a short documentary by Ugo Nespolo titled Boettiinbiancoenero. The film includes the work Pack, today lost, which was memorable because of his subsequent developments of the theme. 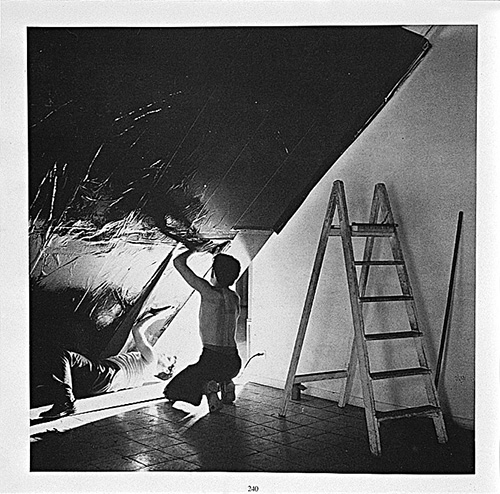 In early spring Boetti took part in various group exhibitions including “Arte Povera” curated by G. Celant at the Galleria de’ Foscherari in Bologna. He exhibited Panettone and produced the poster Città di Torino: a plan of the city in which the streets are indicated with the colored names of the artists resident in them, including himself. The map was included with the exhibition catalog and distributed to the public.
AB also took part in two important group exhibitions in Rome, “Il percorso” and “Teatro delle mostre.”Both consisted of sequences of performances.

“Il percorso” was organized by Mara Coccia, director of the Galleria l’Arco d’Alibert. She invited the Turin-based artists Anselmo, Boetti, Merz, Mondino, Nespolo, Paolini, Piacentino, Pistoletto and Zorio to perform a sequence of events. “At the private viewing there were the artists but no works, because they were created before the eyes of the public on the three days of the happening.”

Boetti built three Colonne in the gallery, using thousands of scalloped paper napkins which he got from a cake shop, strung on three iron rods. The work was documented in a photographic record by Mario Cresci.
“That same day an exhibition of Pino Pascali’s was opening at the Attico. He was showing his Silkworms. Pino and I were really doing the same thing, in fact we were amazed. When I went out to buy the paper napkins at the cake shop, he went round to the drugstore for the colored brushes that he arranged next to each other. We had reached the limits of a certain potential…”.

The “Teatro delle mostre,” curated by Maurizio Calvesi, was held at the Galleria La Tartaruga run by Plinio de Martiis. He recalled the event: “The gallery was transformed into a laboratory… It looked like a stage or a film set.” The exhibition, originally subtitled “An exhibition every day – from 4 to 8 p.m.,” consisted of a series of performances with the direct involvement of the public. AB presented Un cielo: “Boetti … assembled a big frame covered with dark blue paper and the public were given the nails. Behind the frame there were spotlights. The nails were used to pierce the dark blue surface … and everyone produced his own constellation.” 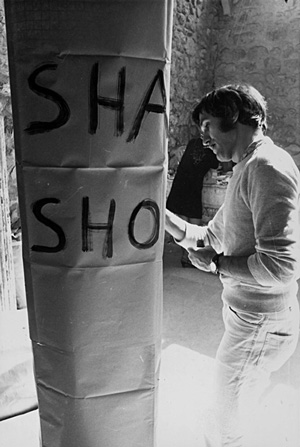 Plinio de Martiis, working in his own special tradition, asked the artists to produce a sign for the performances. At this time in Turin the “Deposit of Art of the Present” was set up. Some photos in the archives show displays of works by AB: Panettone, Legnetti colorati, a castiron work Boetti set on the wall and some plexiglas Cubi filled with various materials.

On 23 April, at Franco Toselli’s Galleria De Neuburg in Milan, Boetti had a solo exhibition with a presentation by T. Trini. The title of the exhibition, “Shaman-Showman,” corresponded to a photomontage which was enlarged as the exhibition poster and displayed in the streets (there also exists a smaller silkscreen edition). Boetti later commented:
“Showman and shaman, because you are always a wizard when you work with head and hand… And showman because every so often you have to be one!”
Conspicuous on the floor, transformed into a dry stream bed, were Colonne, Un metro cubo, Panettone, Legnetti colorati (initially titled Aiuola / “Flower bed”), a Pack galleggiante (an ephemeral work, like the general installation) and, concealed, Ritratto in negativo.

If this exhibition at the Toselli gallery represented the peak of the artist’s involvement in Arte Povera, the autumn exhibition in Amalfi, “Arte Povera più azioni povere,” organized by Marcello Rumma and curated by Germano Celant, marked its most extreme form. Boetti’s participation was described by Gilardi in these terms: “At the Arsenal, Boetti had accumulated and spread out in front of the entrance about thirty gadgets and samples of materials which, all labeled by his gallery, were on a square of white fabric placed on the ground.” The exhibition marked a radical breakthrough as he turned away from Arte Povera:
“With Shaman-Showman I quit. Then I did the work on squared paper using a tracing pencil… By the Amalfi exhibition I was really fed up with it all.” 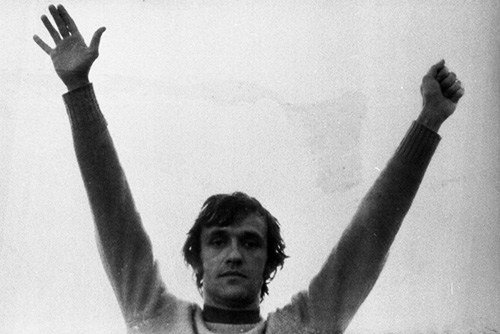 In fact the Amalfi installation included some strongly conceptual works.
“There were three blue panels with three Dates, which I had requested from three women, referring to a future which interested them. They included Anne Marie… I had some idea of the energy a date can convey.”
Of the three dates, only one refers to the past, the others represent expectations, a rendezvous with the future.
“Dates? You know why they’re very important? Because, for example, if you write ‘1970’ on a wall it seems like nothing, but in thirty years’ time… Every day that passes this date becomes more interesting, it’s time at work…”.

Alighiero and Annemarie Boetti and Enrico Castellani at the inauguration of “Shaman/Showman”, photo by Enrico Cattaneo

“Time at work”: in ’68 AB made a wooden panel with 1978 written on it and subtitled “art in ten years’ time.” The following year he carved on a wooden diptych a “continuing tombstone”: the centenary of his birth and the supposed date of his death.
Time and writing: again in ’68 AB performed a number of “poor actions” that consisted in writing in quick-setting concrete verses taken from Herodotus (Verso sud l’ultimo dei paesi abitati è l’Arabia / “To the south the last of the inhabited countries is Arabia”), from Marcuse (Per un uomo alienato / “For an alienated man”), from Rimbaud (J’ai embrassé l’aube d’été). The swift time of writing against the time of matter. Strangely enough all these works were only made public and exhibited twenty years later.