22 March, Berne: the opening of “Live in Your Head. When Attitudes Become Form,” curated by Harald Szeemann. The groundbreaking exhibition compared new trends in America and Europe by looking at Conceptual Art, Land Art and Arte Povera. AB exhibited Alighiero prende il sole a Torino il 24-2-1969, Tavelle, Luna (lost work). In the catalog, on the pages placed at his disposal, he added photographs of other works (also now lost), Sole meunière, Tritella, and a double photographic self-portrait: himself lying on the floor of his studio next to the Portrait in Negative made out of stones.

On 19 April, at the first solo exhibition in the Galleria Sperone, AB presented three works in mixed media: Io prendo il sole a Torino il 24-2-1969 (its second title, later definitively modified to Io che prendo il sole a Torino il 19 gennaio 1969), Portrait of Walter de Maria, Vetrata (which reduced in size became Niente da vedere niente da nascondere). The invitation on paper reproduced the photograph San Bernardino, a portrait of Boetti with one hand open and one closed.
In May, again at the Galleria Sperone: AB took part in the group exhibitions “Disegni e progetti” with Territori occupati, a work embroidered on which returned to the first of the geo-political “forms” begun in 1967. The embroidery was sewn by Annemarie Sauzeau. 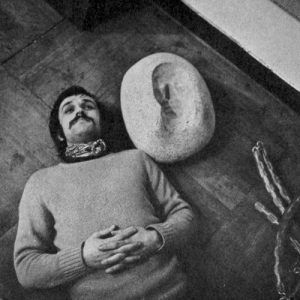 Alighiero Boetti near his self-portrait in negative, 1969

“In spring I left the studio I had in Turin, which had become a storehouse of materials, Eternit, pieces of concrete, stones… I left it all just as it was. I took the squared paper. The Cimento dell’armonia e dell’invenzione consists of redrawing the squares.”

AB began a new series of works. The first example of Cimento dell’armonia e dell’invenzione was also called 42 ore and was supplemented by a recording of the silence and soft noises during the time it took to make. It was exhibited in late September at the “Prospect 69” exhibition at the Stadtische Kunsthalle in Düsseldorf.
The title of this type of drawing refers to Vivaldi’s Opus no. 8, containing the twelve concertos which include the Four Seasons, and a type of music played by AB himself. “In the period Alighiero played a lot of music, he played tabla drums, practicing with compositions based on the proliferation of numbers as musical rhythms. He interpreted ‘Cimento’ (‘contest’) as meaning this type of exercise, how to do musical scales, which was also a ‘contest’ on paper.”

15 July, Turin: his first child, Matteo, was born.
In summer AB began a work in progress, the Viaggi postali. He created twenty-five virtual routes for twenty-five “travelers,” who were friends, collectors and artists, including Marcel Duchamp (who had recently died), Bruce Nauman (whom he met at the exhibition “Live in Your Head. When Attitudes Become Form”), his friend Paolini, the critic Argan and his newborn son Matteo. The work consisted in imagining the addressees had traveled to various places, 181 in all, and then sending them letters they would not receive, since they were obviously not resident at the addresses chosen.

The letters that returned undelivered to the sender, AB, would be put in ever larger envelopes and forwarded to the other points on their journey (the first envelope contained the complete itinerary). The result was twofold. On the one hand the twenty-five final envelopes containing all the preceding ones constituted a single work, called Viaggi postali (“Postal journeys”). On the other the xeroxed copies of recto and verso of the envelopes, made each time before posting the letters again, testified to the 181 stages and constituted the Dossier postale, creating an edition of 99 copies of no fewer than 36,000 photocopies, curated by AB and Clino Trini Castelli.
The Dossier postale recounts the twenty-five imaginary journeys enclosed in the final parcels. The numbering of each example appears, again on file number 181, in a stamp, devised by Clino Trini Castelli, which refers to “file 104,” meaning the last stage of the journey by Bruce Nauman.
“It’s one of the finest works I’ve ever done. Really complicated, it lasted a year.” 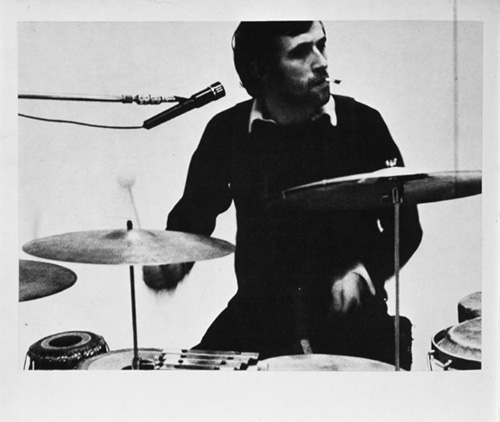 Alighiero Boetti on his drums in the Sperone gallery, 1969, photo by Paolo Mussat Sartor

In autumn he took part in various group exhibitions, lavishing particular care on the catalogs, which at the time were considered by artists as works in themselves, self-sufficient art projects. He worked on the xerox “portraits” Autoritratto and Ritratto di Annemarie, consisting respectively of twelve and nine photocopied sheets, which all show the artist’s face intent on communicating in deaf-mute alphabet. He also turned his hand to other experiments, again using a photocopier, for example by letting some chicks wander about on the surface of the photocopy panel.
“I’d go round to the Rank Xerox showroom and pay my hundred liras a copy…”.

On an old map printed in black and white, AB colored in the various countries using the colors of their flags. This Planisfero politico (in two variants) was the starting point, developed in 1971, for his later embroidered maps. At the same time he planned to have a globe made, of sizable dimensions, which would show only the contours of the land and sea beds, without the presence of water. The outlines of the continents would not be perceptible, so the effect would be like the surface of the moon. It was never made because it proved impossible to obtain accurate scientific data about the features of the seabed, which was classified information during the cold war. There survive two small plaster reliefs, fragmentary models of the initial project.