On 5 March, the Basel Kunsthalle presented the first anthological exhibition of Boetti’s work, curated by Jean-Christophe Ammann. Almost sixty works were on display, including the never previously exhibited set of Viaggi postali, completed by the Dossier postale which constituted its progressive “radiography”; some works of large dimensions such as Cimento dell’armonia e dell’invenzione, made up of twenty-five pieces (1969), Estate 70, I sei sensi, a polyptcyh of eleven panels (1973), 720 lettere dall’Afghanistan, the large Mappa (1971–73), Ordine e disordine, consisting of a hundred embroideries (1973), and I Vedenti, a set of five embroideries. 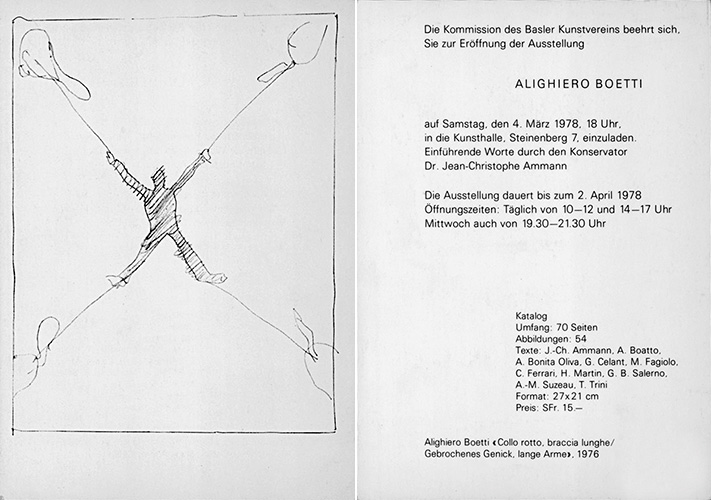 Invitation to the Kunsthalle Basel exhibition, 1978

In addition it showed recent works presented the previous season in Italy, such as Collo rotto e braccia lunghe, Gary Gilmore, Aerei, il Libro dei Fiumi (which the public could leaf through) and a large new embroidery Titoli. On that occasion Emidio Greco shot “Niente da vedere niente da nascondere,” still a fundamental document and film about the artist.
In March and May AB took part in the De Foscherari group exhibition “Le figure del tempo,” with works in two out of the three sections (Lampada annuale and Cimento dell’armonia e dell’invenzione).

On 6 May, the Galleria Mario Diacono in Bologna again presented Collo rotto, braccia lunghe e Gary Gilmore. Diacono wrote and published a pamphlet with an illuminating analysis of the concept of “the left hand” in Boetti’s work, in which he coined the neologism sinistritudine (“leftishness”) to indicate the gap between idea and execution, “the left hand of being…, the hypersignifier by which the “e” (and) in Boetti’s name has doubled/copied social meanings and references,” to the point where in other works it had become “that team of craft workers who over the years have materially executed some of the works.” 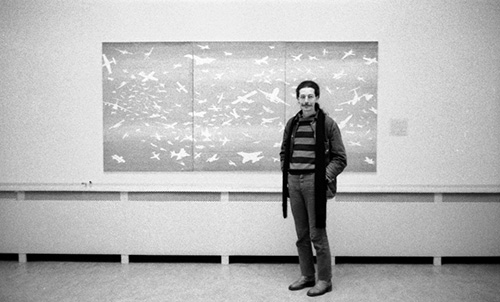 On 11 May, the Galleria Liverani in Rome opened “Pas de deux,” a man/woman exhibition curated by Annemarie Sauzeau Boetti and Giovan Battista Salerno. AB, in duet with Berty Skuber, presented Regno animale, the first composition of the Tra sé e sé type of work. In 1981, for the exhibition at the Galleria Chantal Crousel, he wrote:

“A straight line joins the pencil of Alighiero to the pencil of Boetti. A kind of Ping Pong. Animals, even a stone, and to avoid privileges even a moped (mine), follow their own path, or rather orbit. It is the quietest work I have ever done. These animals move across the sheet bearing in their images the memory of millions and millions of their predecessors and they evoke time, ancient time, slow, anonymous, identical, unmoving, unchanging.”

The book Classifying the thousand longest rivers in the world, finally published and presented in Basel, was promoted in various galleries, for example at the Galerie Paul Maenz in Cologne on 31 May and in Rome at Il Cortile on 13 June.
On 2 July, AB exhibited Dodici forme a partire dal 10 giugno 1967 at the 39th Venice Biennale, “Sei stazioni per Arte natura/La natura dell’arte” curated by J.-C. Ammann, A. Bonito Oliva, A. Del Guercio and F. Menna. 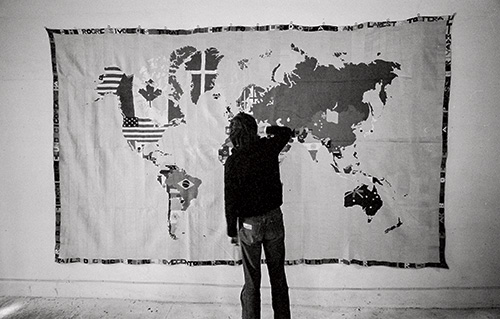 A review of the Biennale in Data presented a highly significant survey of AB’s conceptual work, starting from the Arte Povera years and including the 1967 Manifesto, the Dossier postale (1969–1970), a Lavoro postale sent from Kabul in 1971, down to the most recent ink drawing Gli anni della mia vita, 1976.

This year AB devoted himself increasingly to his private works on paper in mixed media (colored inks, pochoir, collage, frottage, massage and embossing), including lettering in pencil with his left hand, creating a sort of diary account of his practices.

“What always speaks in silence is the body. So I wrote with two hands, moving from the center outwards to the greatest possible extension of my arms. I measured my unit of extension as 1.83 meters. That was March 1970 in Turin.”70 “August 1978 in Rome, Alighiero and Boetti prepare some drawings, collages and/or others before undertaking some big new works. I am particularly alone and I found a precise analogy to my commas, as they’re called in English (I like the term more than virgole) in Mallarmé… I am using material from the past, detritus, leftovers, catalogs… The basis is pack ice, which I believe represents my brain at this time.”

Or again, on the photograph of himself with his fist closed and fist open, dating from 1968 and titled San Bernardino:

“Ten years ago at San Bernardino-Vernazza photographed by Robert Cagnoli whom I’ve lost touch with for some years now—I don’t remember the color of the sweater certainly I haven’t got it any more—the photo served as a postcard-invitation to my first exhibition at the Sperone gallery…”.

On 14 December, he had a solo exhibition at the Galleria Stein. The invitation contained a number of phrases arranged in squares on squared paper. This was also the preparatory phase of all of the embroideries using letters which were later sewn in Afghanistan. AB exhibited only embroideries, including Ordine e disordine, made up of a hundred elements, the large embroidery Titoli and a black and white Segno e disegno. 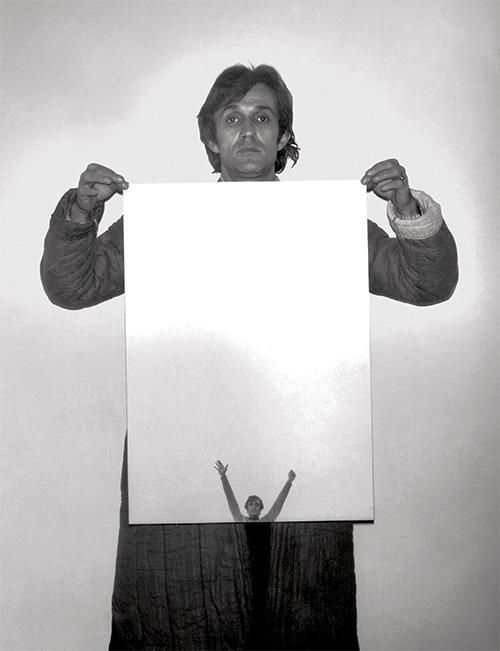