Early in ’84 Boetti participated in a group exhibition, “Il Modo Italiano,” in Los Angeles, presented at the various campuses of the University of California. Besides displaying a group of earlier works, Boetti produced a permanent wall mosaic, here shown for the first time. Measuring 3 × 3 meters, it translated the mechanism of Alternando da uno a cento e viceversa into black and white ceramic. The preparatory drawings had been entrusted to the invention of the students.

The work was permanently embedded in the west wall of the Fine Arts Building of California State University at Northridge. Louise Lewis, director of the university gallery, wrote: “The finished mosaic is exquisite. It is also startling, enticing and challenging. It is both a visual feast and a cerebral code. The tile invites tactile exploration—one of the rare instances where touching the artwork is encouraged.”
On 12 June, he took part in “Coerenza in coerenza. Dall’Arte Povera al 1984,” curated by Germano Celant, at the Mole Antonelliana in Turin. His most recent works exhibited included: Ordine e Disordine of 1980, an installation of one hundred small embroideries, Quattro Moli of 1982 (i.e. four Pier Piets in ballpoint on paper) and Ottobre ’83, Novembre ’83 and Dicembre ’83, presented together for the first time. 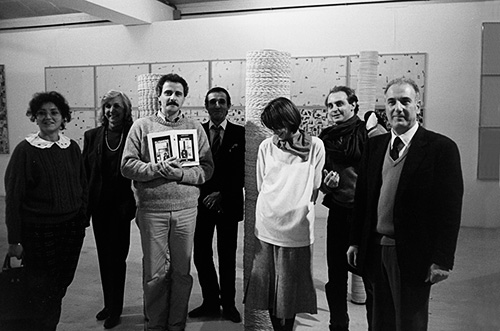 Inauguration of the retrospective at the Municipal Art Gallery of Ravenna with (from left) E. Gentile, M. Bonomo, G. Gentile, AB, A. Bonomo, F.Valentini, G. Nati, photo by Giorgio Colombo

He moved to a new studio on Via del Pantheon: the building’s magnificent architectural form now appears in numerous notes and drawings by the artist, often accompanying his signature: “all’amato Pantheon” or “Accanto al Pantheon.” The latter even became the title of a volume of photographs by Randi Malkin- Steinberger. Taken between March and June 1989 in AB’s studio, they were published in 1991 by Prearo, with texts by critics selected by the artist.
He produced new compositions in mixed media on paper, which were presented in September at the exhibition at the Petit Palais in Geneva, organized by the Erick Frank Gallery, and subsequently in October in the exhibition “Disegni 1984” at the Galleria Franz Paludetto in Turin. These new, highly colored collage-drawings (such as Nuotando al gerundio) always allow for the insertion of calligraphic elements, free reflections, private annotations added by AB with his left hand, as if to exemplify his declaration: “Writing with the left hand is drawing.”

“Why do we use the active verb ‘nuotare’ [swim] and the reflexive verb ‘tuffarsi’ [dive], instead of ‘nuotarsi’? The reflexive form should be used for both acts. They have in common the same liquid element, H2 O, in which the body is immersed and compressed in its every part. Like the air but with more ‘sense.’ So between swimming and diving my last evening of August 1984 comes to an end. In Rome fairly happy.”

In these drawings the dense “swarming of nature, a dull affair” evolves towards an ever lighter harmony, with “jungles” of tigers, panthers, monkeys, frogs, fish and “pools of divers” of Pompeiian memory. Performed in serene solitude, without the assistance of others, they grew out of a sort of natural urge to compensate for the practice of delegating his work, as in his ballpoints and tapestries.

“Concentrating on oneself or dispersing oneself outside oneself to shatter to be pulverized to become a thousand droplets that will fall that will fall on a thousand rivers of grass and every drop has its sound, its note, so that the rain will make music and be spread by the wind … rain and wind —sweet and violent energies but perhaps the best moment is the moment before rain or the clear calm before the wind rises.” 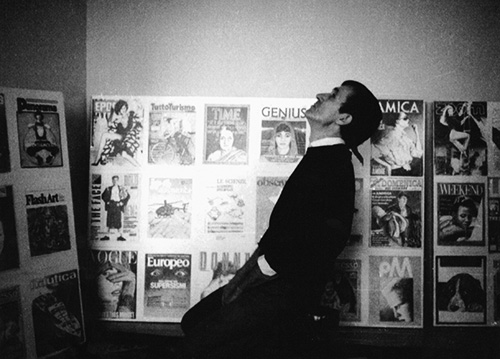 Alighiero Boetti in front of the Copertine (year 1984)

Among the small square embroideries still entrusted to the embroiderers in Afghanistan, new inscriptions developed, including Divine astrazioni, Verba volant scripta manent and I fregi e gli sfregi.
An important anthological exhibition titled “Alighiero Boetti” opened at the Pinacoteca Comunale in Ravenna on 15 December. It presented over fifty works from the sixties (like Lampada Annuale of ’66 or Colonne of ’68), from the Arte Povera period, down to the conceptual breakthrough of the sixties (Cimento dell’Armonia e dell’Invenzione of ’69), and his most recent output, with the magazine covers of October 83 and the drawing Articolazione of 1984 (the image used on the invitation).
For the occasion a book titled Alighiero & Boetti94 was published by Alberto Boatto. It not only documented the works exhibited but constituted a monograph with a full bibliography (by Guido Nati) which served as a general updating of the 1978 Basel catalog.