AB increasingly used new technical instruments, light and rapid, related to innovations in communication: photocopies, faxes, in any case sheets of paper in commercial format. This gave rise to the series in A4 format he called Extra-strong. Each sheet, worked in pencil, colored inks, collages and various postmarks, became an illuminated microcosm, the page of a codex or diary.

His other passion for the media (newspapers, journals and magazines) found a new mode of expression: instead of getting Bobo Marescalchi to redraw images from magazine covers in pencil (after the 1984, 1986 and 1988 annual series, 1990 was the last), AB began to work on his own, photocopying in black and white. Talking about his experiments with the “Rank Zerox 3600,” begun in 1969, he complained of the reluctance of businesses to collaborate in artistic research:

“…There were a lot of ideas. I said a photocopier wasn’t just office equipment. In the year 2000 everyone will have one in their living room. Give me one to take home and I’ll document some of its possible creative applications. What other artists did, from Munari on, was to manipulate their mechanisms, alter the timing, change the quantity of toner, etc. But I was interested in the standard application of the photocopier. But they didn’t do anything.”

With the coming of the photocopier, AB finally had found “his living room photocopier” and operated it in his studio. Already in the eighties he had begun to produce books photocopied in limited editions (1984, 1986, 1988), parallel with the annate redrawn in pencil. In ’92 111 came out, a diary of 111 pages consisting of notes, private drawings and illustrations from magazines, all photocopied and so standardized in black and white.
All these “books,” in keeping with AB’s instructions, were bound in red cloth (of Afghan memory) with the title written in golden characters.

Parallel with the works in small format which he did himself, AB stepped up the output of large works which required lengthy production times and an almost managerial organization, by this time involving the work of many people.
He traveled less, preferring to send his collaborators, his children Matteo and Agata or his wife Caterina, to Peshawar. 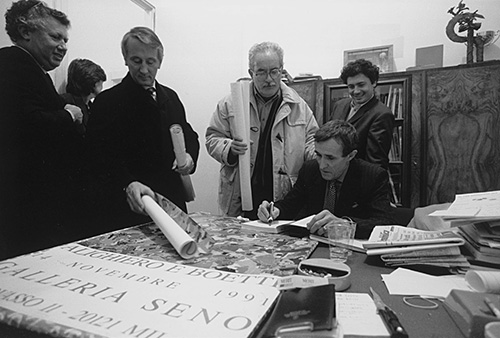 Inauguration at the Galleria Seno, Milan 1991, photo by Giorgio Colombo

This year there were numerous group exhibitions. Among solo exhibitions in Italy, those at the Galleria Bonomo in Bari and the Galleria Seno in Milan were particularly significant. At the first one of these, opening on 22 March, AB exhibited a continuous frieze that ran around the perimeter of the gallery, two postal works from ’89 (one done in Tanzania) and numerous works on paper with political themes related to current events, such as the Gulf War. The second, opening on 8 October, presented among other works an outsize Tutto and a series of drawings on paper on the theme of Bugs Bunny, which were shown for the first time. The group exhibitions were mainly historical in character, covering the period from Arte Povera to the eighties.

In March, the group exhibition “60–90 Trenta anni di avanguardie romane,” curated by Laura Cherubini and Arnaldo Romani Brizzi, was held at the Palazzo dei Congressi in Rome. AB was present with two works: Zig Zag from ’67 and Sale e Zucchero of ’73. On 26 April, the Munich Kunsteverein, presented “Arte Povera 1971 und 20. Jahre Danach.” The exhibition displayed historical works, including Io che prendo il sole a Torino il 19 gennaio 1969, 1970 in cast iron and some panels of the series Colori (Bianco Saratoga e Giallo Positano) linked to recent works, among which was a Mappa from ’83 and a Tutto of ’89. The catalog cover reproduced a Mimetico of 1981, which was not present in the exhibition.

On 20 September, at the Benedictine Monastery in Monreale, the exhibition “Ottanta Novanta,” curated by Francesco Gallo, exhibited Quindici, fifteen small embroideries from Kabul, a postal work of ’72 and the work on paper in two sheets, Collo Rotto braccia lunghe of ’76.
In November, the Palazzo della Permanente in Milan presented a highly original exhibition titled “Ricamata Pittura. Quadri ad ago dal XVII al XX secolo.” Only three twentieth-century artists were chosen: AB found himself in the company of Marcello Nizzoli and the greatly admired Alberto Savinio, with the embroidery Sandro Penna: Io vivere vorrei…
If in the catalog of “Magiciens de la terre,” in reply to the question, “What is beauty?” AB had answered “It’s what reminds us we are close to the gods,”116 on 16 May, in a conversation with Sergio Givone he declared:

“Beauty is a question of thought and the urge to create it. … What does futile mean? So is a poem futile, is putting four words in a line futile? I don’t think so. I think, as I said before, that the deep emotions in my life have come from artists, certainly not nature. Or nature as well, but elaborated mentally, intellectually. In fact I think art is the least futile thing there is…”.

Throughout the year AB devoted himself with great passion and energy to two ambitious projects: the traveling exhibition to be held in Germany from ’92 on and the immense project planned for late ’93 at Le Centre d’Art Le Magasin in Grenoble, whose preparation would take two years’ work in France and Peshawar, with a collective commitment to the study of the Pantheon as if it were one of Warhol’s factories. At the same time the large maps that were to be the last were in the hands of the embroiderers.
Alighiero seems to have worn himself out organizing his individual and collective works. He lived in greater isolation. He was concerned at the effects of the financial crisis (due to the First Gulf War) and sought refuge in the “artificial paradises” which he had never wholly abandoned.