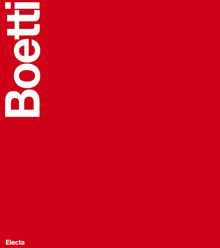 The third tome of the General Catalog catalogs the works created between 1980 and 1987. A decade full of changes, from the great production of the delegated works, such as the Maps, the Tutto, the big Embroidery, the Airplanes or the Biro to works on paper with the great cycles and the numerous sheets with the narrative paths traced with the artist’s own hand.

This tome begins in the background of a violent and deeply sad change for Boetti. In 1980, due to the war in Afghanistan, Boetti can no longer return there, and follows the work remotely, with difficulty. The works like the Maps, the Tutto and the big Embroidery of the 80s were therefore started in the late ’70s.
At least until the mid-80s, Boetti did not undertake other embroideries because of the remoteness and operational structures threatened there in Afghanistan, and will begin to start new ones only towards the end of the decade in Pakistan but still continuing to work with his hands Afghans in refugee camps.
A transition to a new mode of production, but which will mainly concern the works of the 4th tome.
Instead, in the first half of the 1980s, Boetti noticeably accelerates the production of Biro and Airplanes that will be almost completely exhausted in the early 90s.

The decision to divide this tome into two parts was dictated by Boetti’s own work. The sharp increase in production of these years and the complexity of implementation pertinent to the catalog itself means that it was decided to treat the works of the 80s in two parts and changing the methodology.
In fact, if in the first two tomes, the works are cataloged chronologically, in this tome (both the first and the second part) the cataloging is and will be done by type and within each nucleus, the works are reorganized chronologically.
The first part of the third tome catalogs the Maps, the Tutto, the big Embroidery, the Biro and the Biro Airplanes made between 1980 and 1987.
All types already started in the 70s and who know their affirmation in the 80s. Great works, in terms of size and notoriety. All “delegate” works therefore made through the hands of others.