At the start of the year, on 22 January, in a new Clessidra cerniera e viceversa he wrote:

“In Rome in my new solitary home with all the future to think to imagine. …What a crazy difference between the AEB of ’72 arrival in Rome. Afghanistan is at war… It’s dead like Adelina too. I’m forty-two and I have to bring a new world into the world.”

By this time his relationship with his wife had broken down. The artist was living in his studio, but since it was next to the family apartment, he continued to see his children every day. At the same time he tried to attend his exhibitions.
On 6 February, an important solo exhibition was held at the Galerie Annemarie Verna in Zurich. Of his earlier works he exhibited La storia naturale della moltiplicazione (1974), Tracce del racconto (1976) and the more recent white embroidery L’albero delle ore (1979), three small versions of Clessidra, seven drawings from the cycle La natura una faccenda ottusa, an example of the edition Da 1 a 10, published by Emme Edizioni in 1981, and four versions in different colors of Molo o Pier Piet.

On 30 April, at the Mura Aureliane in Rome, there was the opening of “Avantguardia Transavanguardia” curated by Achille Bonito Oliva. The exhibits were a Colonna of 1968, Io che prendo il sole il 19 gennaio 1969, Regno musicale of 1979, Afghanistan of 1980 and the drawing on paper which had been used as the image on the invitation to the solo exhibition at the Galerie Annemarie Verna.
On 2 June, in Rome at the Galleria Mario Diacono, for one evening, as one of a sequence of events promoted by the gallery director, he exhibited the large Clessidra cerniera e viceversa, produced in December of the previous year.

On 7 June, he attended Documenta VII in Kassel, an edition curated by Rudi Fuchs, where he exhibited a Mappa of 1971–72 together with Afghanistan, Le quattro operazioni, Perdita d’identità, three works from the cycle La natura una faccenda ottusa, and the large tapestry (begun in ’76) of I mille fiumi più lunghi del mon- do, presented together with the book, which was the origin of the project.
On 24 July, in the Cinque Terre, he had a serious car accident that left him bedridden for two months. 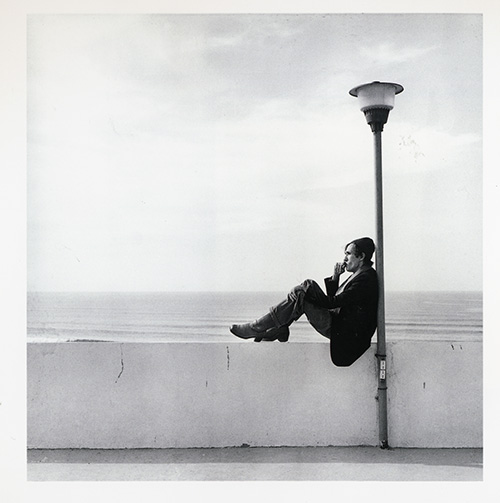 On 27 September, having recently left the clinic, he installed in the AAM/COOP studio in Rome, assisted by his friend the art dealer Francesco Moschini, the eleventh “Duetto,” one of a series of exhibitions which paired an artist and an architect. AB was paired with his friend Ettore Sottsass Jr., exhibiting for the second time the very private work in progress Il Muro and a large Clessidra.
“Entering the gallery, there is a bit of ‘wall’ on the right and a bit on the left, so the head looks at it like a ping pong match… Then there’s the repertory of Sotsass’s drawings and ideas set in horizontal cases and at the far end of the gallery there’s another white painting by Boetti with a hole in the middle.”

In October there was an important group exhibition in London at two venues, the Hayward Gallery and the ICA: “Arte italiana 1960-1982,” organized in partnership with the City of Milan. AB was represented by four early works: Colonna di carta dating from 1968, the offset poster Faccine del ’77, Io che prendo il sole a Torino il 19 gennaio 69, a Mappa and Aerei in blue ballpoint. On 30 November, in Milan, he had a solo exhibition at the Galleria Toselli. On display were a Clessidra cerniera viceversa and the embroidery Pack.
In the course of the year the Padiglione d’Arte Contemporanea in Milan welcomed the traveling exhibition (already presented at the Power Gallery in Sydney and at the University of Queensland) “Spelt from Sibyl’s Leaves, Explorations in Italian Art” curated by Luigi Ballerini. The exhibits included Gli anni della mia vita, 720 lettere dall’Afganistan presented with the related book by Dastaghir, a Mappa and two composi- tions of Natura una faccenda ottusa.
The year ended with a long interview with Bruno Corà, Un disegno del pensiero che va. The artist reflected on his past work, but also looked toward the future:

“The Chinese say that in a painting there has to be a visual element, calligraphy and poetry. In my work all three of these ingredients are present because a painter also has to be a good poet. I don’t know if I’m good or bad, but I want to be a poet, too, writing in my own way. By this means I present something written, as a writer. Mine is writing about thought, which goes where it will…”.