Boetti completed the series of Viaggi postali over the course of the year. Part of Dossier postale had already been presented in Bologna at the “Terza Biennale Internazionale della giovane pittura” in January. Boetti began his first works based on permutations and combinations of stamps. His first Lavoro postale, based on three different stamps (with six possible combinations, hence six envelopes), was sent to the Galleria Sperone. 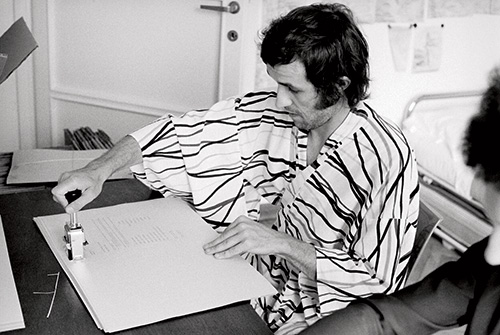 In Munich that April, during the survey “Aktionsraum 1,” Boetti carried out a sequence of actions which included giving a lecture in two languages, Esperanto and Italian, followed by the gradual tearing up of a sheet of paper on the principle of Raddoppiare dimezzando (doubling by halving); then, finally, for the first time, he did two-handed mural writing, simultaneously towards right and left, using the text puntopuntinozerogocciagerme.
Cimento dell’armonia e dell’invenzione (varied across numerous sheets of paper) and Millenovecentosettanta (EMEIELLE … the spelling of the year 1970) were his most innovative works. They were presented at all his solo or group exhibitions in Europe and defined the birth of conceptual art. 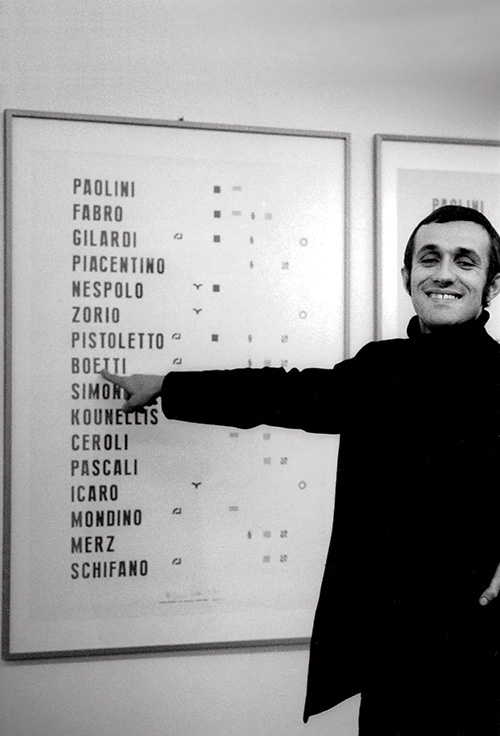 Alighiero Boetti in front of the Manifesto at the Franco Toselli gallery in Milan 1970, photo by Paolo Mussat Sartor

Of Millenovecentosettanta, a square of forty-nine letters, exists a version in lace and others made of wood or cast iron. AB sprayed green paint over the latter for every installation and the halo that spread beyond the limits of the square united the iron and the wall in a single “cloud.” This arrangement of a date as a square was the source of all his language squares in subsequent years.
In “Conceptual Art, Arte Povera, Land Art,” an international exhibition curated by G. Celant at the Galleria Civica d’Arte Moderna in Turin, AB exhibited a castiron version of Millenovecentosettanta. It was also the image printed on the exhibition posters. Among the other conceptual exhibitions, a major event was “Processi di pensiero visualizzati” at the Kunstmuseum in Lucerne, curated by J.C. Ammann. In the pages placed at AB’s disposal in the catalog, he presented four spare drawings linked to four poetic quotations from Johnson, Yeats, Roheim and Hopkins. 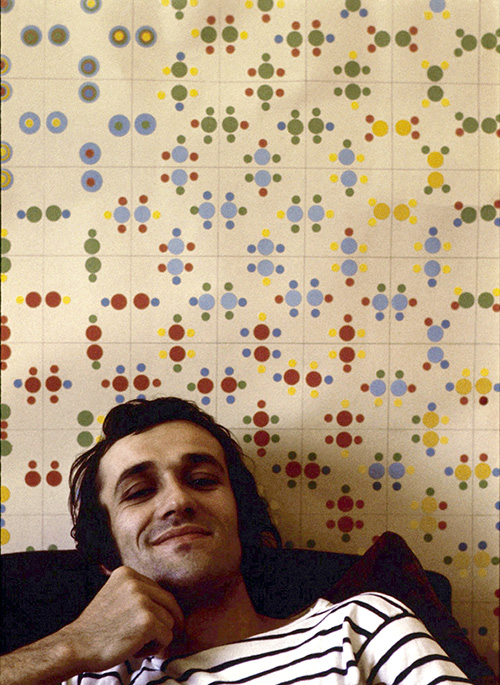 He continued to experiment with squared paper. After the tracings and word squares, in 1970 he adopted a new approach: using plain sheets of copybook paper, he began writing with commas, a system he developed further in 1972 in his works in ballpoint pen.
All through the summer he withdrew, “encamped” in Franco Toselli’s Milan gallery, “closed for the holidays.” He took to its extreme development the interplay of mirrored combinatorial marks on a checked surface, which he had begun in 1967 on a wooden checker board and continued with colored marks on sheets of drawing paper. In this way he created Estate 70 (“Summer 70”), a roll twenty meters long, covered with thousands of self-adhesive stickers. He again adopted the same colored mechanism in a project using bathroom tiles, but never completed it. 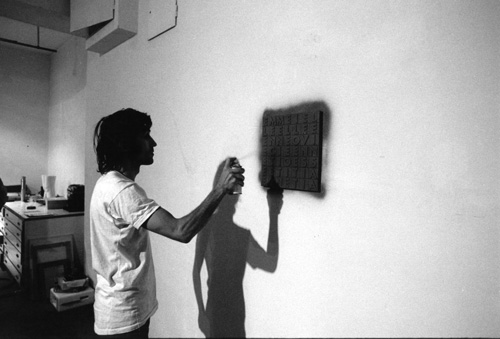 At the end of the summer, in his passion for serial works, AB planned to place geographical features in progressive (decreasing) order, with a classification of the rivers of the world which went well beyond the modest lists found in encyclopedias. His wife was involved in the project. In October Annemarie Sauzeau started to draw up a list of the world’s one thousand longest rivers. She made preliminary contacts for publication with the Istituto De Agostini in Novara and the Geopaedia project at Pergamon Press in London, and acquired complex unpublished scientific data through correspondence with geographic institutes and university departments in Africa, Latin America and Asia. The long project was brought to completion in 1974 with the final classification, while it took another three years for the publication of Classifying, the thousand longest rivers in the world, a volume of over a thousand pages. The idea behind the project was clear from the start:

“It’s a linguistic work which grew out of the idea of classifications. It’s based on measurements. Geography has nothing to do with it.” 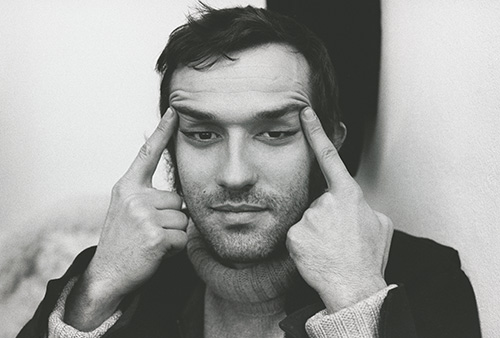 Alighiero Boetti at the inauguration of the exhibition of Mel Bochner – Galleria Toselli of Milan, 1970, photo by Giorgio Colombo

AB’s conceptual position emerged clearly throughout 1970. For example, in autumn at the Kunstverein in Hanover, AB participated with a performance in the video survey identifications, organized by Gerry Schum. In it he stood with his back to the camera and wrote on the wall with both hands simultaneously the sentence: Giovedì venti quattro settembre mille nove cento settanta (“Thursday the twenty- fourth of September one thousand nine hundred and seventy”). Already in March, Paolo Mussat Sartor photographed Alighiero Boetti in his house on Via Luisa del Carretto writing the date on the wall with both hands Oggivenerdiventisettemarzomillenovecentosettantaore.
In Rome the year closed with his participation in an important group exhibition: “Vitalità del negativo 1960–70,” curated by Achille Bonito Oliva, organized by the Incontri Internazionali d’Arte at the Palazzo delle Esposizioni. Boetti exhibited a series of sheets from Cimento dell’armonia e dell’invenzione. 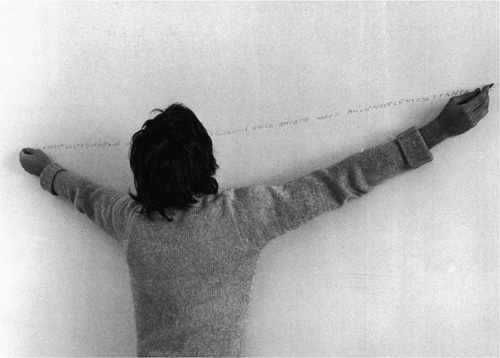