In February Boetti had a solo exhibition at Franco Toselli’s gallery in Milan, “Franco Toselli c/o Alighiero Boetti.” Some postal works were exhibited, notably Centoventi lettere, presenting 120 stamped envelopes based on the number of permutations possible starting from five, in this case five Italian stamps of different values and colors. This was the first postal work in which the envelopes contained “messages” to be exhibited outside the envelopes: 120 sheets of tissue paper, each with a puzzle-drawing (Pack) in black ink. The drawings removed from the envelopes were bound in a volume with a red cloth cover.
On 16 March Agata, his second child, was born. 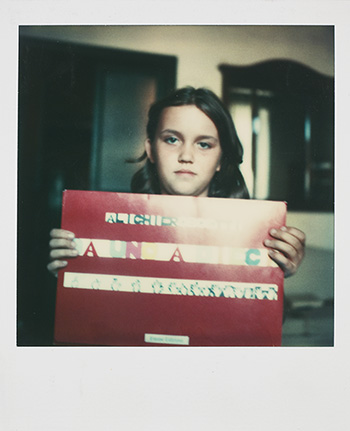 After spending spring in Kabul, AB brought back to Italy the first medium-sized embroidered Mappe (of the two larger Mappe, one was completed the following autumn, the other only in spring 1973).

“The first reactions were terrible. People were annoyed. It should be said that few artists at the time had their pieces made by craftsmen. The public of the day found it both embarrassing conceptually and too ‘pretty.’ But all the collectors wanted one!… I come from Turin, I’m a northerner, and in those days I was a lot more rigorous, far too rigorous. To the point where I never used color in my work. Living in Rome did me good. I then opted for openness, generosity, and freed myself from that excessively rigorous idea that you should only make a single work out of a single idea. It was Gian Enzo Sperone who finally convinced me… From then on I took the opposite approach, profusion. I turned to serial art.”

The May issue of Data magazine carried a detail from a Mappa on its cover. The same issue had an article by Tommaso Trini titled “Abeeghiiilooortt.” 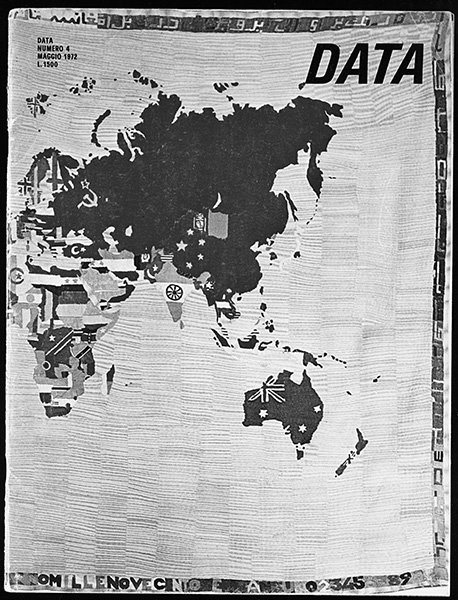 18–30 June, “Alighiero e Boetti,” solo exhibition at the Galerie MTL in Brussels. This was the first time Boet- ti’s name was given this form.
In summer AB presented his work at four important group exhibitions held at close intervals. On 29 April, “De Europa” (a group exhibition of thirteen Euro- pean artists) at the John Weber Gallery in New York exhibited Dodici forme dal 10 giugno 1967. On 11 June, at the 36th Venice Biennale, curated by Achille Bonito Oliva, Boetti again did his two-handed writing performance.

On 23 June, at the Festival of the Two Worlds in Spoleto, in the exhibition “420 West Broadway at Spoleto Festival,” he exhibited the sequence of Dodici forme dal 10 giugno 1967. Finally, on 30 June at the fifth edition of the Kassel Documenta, curated by H. Szeeman, he presented a highly complex Lavoro postale, the first made by starting from six (Italian) stamps of different values and colors. The number of possible permutations enabled the artist to present 120 envelopes, stamped and obliterated, addressed to the Galleria Sperone. In the same period he actually undertook the permutations of seven (Italian) stamps, giving 5,040 possible combinations, hence 5,040 envelopes addressed to himself as Victoria Boogie-Woogie. 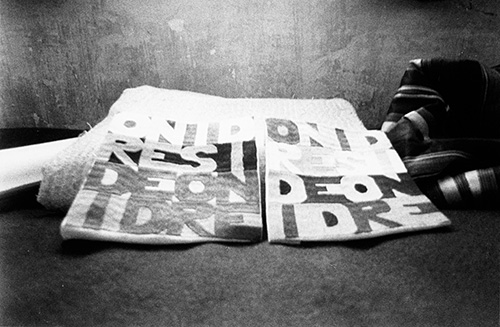 In Kabul in September Boetti arranged for the embroidering of a first small word square, Ordine e disordine, measuring about 20 × 20 cm, embroidered in many colors. He also started another type of embroidery whose title, I Vedenti (“The Sighted”) refers to the central lettering, which is interwoven with the colorful ground and so barely perceptible.
In October, returning to Italy, he joined his wife and children at their new home at 38 Via del Moro in Trastevere, Rome.
He began the cycle of ballpoint works done “in negative” (with the blank “reserve” emerging against a ground hatched in ballpoint). He again wrote his name in different ways, both by using the letters of which it was composed and by playing with the letters of the alphabet and commas. The structure of all of his works in biro “written” in white commas meant that each comma was given the value of a letter, being deciphered on the basis of Cartesian axes: one variable consisted of reading from left to right and the other of the letters of the alphabet. 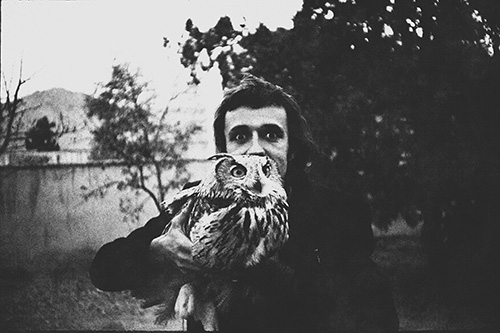 He wrote AEB, ALIGHIERO, AIIEOOEI/LGHRBTT (separating vowels from consonants). Finally in ’73 there appeared Ononimo, the supreme variant of his identity, a neologism fusing the Italian words for “homonym” and “anonymous.” It was presented in sequences of eleven inseparable sheets (11 being his favorite number) in blue or red, while other versions of Ononimo are single or “isolated” (with AB writing “isolato” next to his signature). The background, hatched in with ballpoint, was a long, laborious work and was delegated to other hands, precisely because the anonymity and variety of the “hand” were part of the project, though with a trace of irony the artist suggested other reasons:

“I often get other people to do the work, even though I’d really like to do it myself. I’d love to be able to go out in the countryside with a sheet of blank paper and take six months filling it in. I’d like to but I can’t. I just can’t do it, after two minutes I’d go crazy. But since I like the thing in itself, I find some people to do it, rather like in Muslim countries, where if you can’t go to Mecca you pay someone who goes for you and says your prayers, he does it all for you…”.

The first person he asked to do the work was a friend in Turin, Gigliola Re. When Boetti moved to Rome, she immediately found him another collaborator there.
Number 62 of Bulletin, a magazine published by the Art & Project Gallery in Amsterdam, was devoted to Boetti. It had a black and white two-page spread illustrating one of his postal works: six envelopes from Afghanistan addressed to himself in Turin.