On 20 January, the group exhibition “Eight Italians,” organized by Sperone, opened at Art & Project in Amsterdam and MTL in Brussels. Boetti exhibited with De Dominicis, Merz and Zorio (the other subgroup comprised Anselmo, Paolini, Penone and Salvo). Besides a postal work, AB exhibited two of his first works drawn in negative in ballpoint, ABEEGHIIILOORT and ALIGHIERO E BOETTI, a “sculpture” from 1971 made up of three elements in silver titled Tre and a calligraphy Millenovecentosettantadue.

In February, at the Galleria Marilena Bonomo in Bari, he had a solo exhibition “Alighiero e Boetti. Il progressivo svanire della consuetudine.” AB exhibited the postal work Quadratura del dieci (1972). This was a “self-arrangement” of sixteen envelopes, and some of the new works in ballpoint, particularly the one that gave the title to the exhibition.
In March AB had his first solo exhibition at the John Weber Gallery in New York. On display were a Mappa and two Lavori postali, including Victoria Boogie-Woogie. Apart from a review by Bruce Boice in Art- forum, the exhibition failed to attract much interest. Soon after the New York inauguration, Boetti left for Kabul. He returned to Italy in the company of a young Afghan, Salman Ali, who lived with him and his family until the artist’s death. 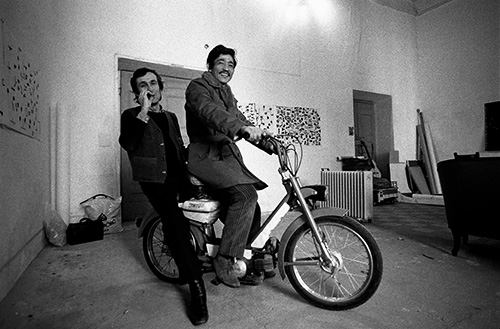 Alighiero Boetti and Salman Ali in the study of Piazza S. Apollonia 3, 1975, photo by Giorgio Colombo

In spring he moved from his home at Vicolo del Moro 38 for the nearby Piazza Sant’Apollonia, where, besides an apartment, he had a large studio. The windows gave onto Piazza Santa Maria in Trastevere and looked towards the Romanesque church.
In May, in a solo exhibition at the Galleria Sperone-Fisher in Rome, Boetti presented four important works: one Mappa, the Serie di merli disposti ad intervalli regolari lungo gli spalti di una muraglia was shown for the first time and two large works in blue ballpoint: Il progressivo svanire della consuetudine and the dip- tych Mettere al mondo il mondo.
In the same month, at the 10th Quadriennale Nazionale d’Arte in the Palazzo delle Esposizioni he presented two works from his Arte Povera period, Lampada Annuale and Manifesto, together with a recent Lavoro postale of 492 envelopes.

On 7 June, with a solo exhibition at the Galleria Toselli, he confirmed a characteristic already perceptible in his solo show of the previous months: his postal works, ballpoints and embroidered maps were by this time parallel typologies enriched by overlaps and affinities. The manual phases of this highly diversified work was partly delegated to others—the embroidery in Afghanistan and ballpoints in Rome—while the artist personally dealt with all phases of the postal works, notable for the use of the different kinds of stamps available in the various countries where he stayed. The Serie di merli disposti ad intervalli regolari lungo gli spalti di una muraglia was again exhibited, and Giorgio Colombo took a photo of the work in progress. 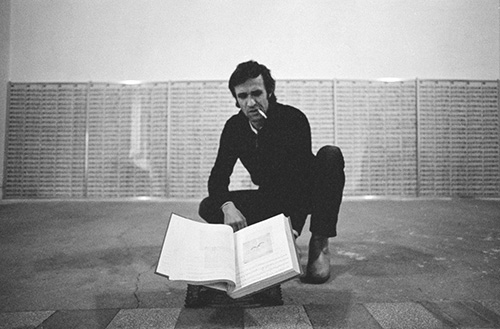 Alighiero Boetti prepared in 1978 at the Kunsthalle in Basel “720 letters from Afghanistan”, realized in 1973-1974, photo by Gianfranco Gorgoni

The ballpoint works were stepped up after the summer, when AB commissioned Mariangela De Gaetano not only to do the hatching in biro herself on a number of sheets (the various signs, letters of the alphabet, commas or words were always drawn by the artist himself) but also to organize and coordinate the work by others.

She recounted: “I chose people from all quarters of the town, of all ages, and they all worked in different ways. The only rule they had to follow was not to let the white appear between the hatching. For the rest, they could do the work as they wanted… Some people drew thicker lines, some people stiffer, others did the work more mechanically, lost in thought, daydreaming, a bit like automatic writing. Boetti often wouldn’t let me tell him who had done a sheet, he liked to guess. He recognized the line of a woman. Then he used to ask me about all of them, who they were and what they did in life. The work took a long time. Personally I took a year to complete the first one, a single sheet measuring a meter and a half out of more than 4 meters, Il progressivo svanire dalla consuetudine.”

The first ballpoints done in Turin were exclusively in dark blue ink, while in Rome he used black, red and green. In the first compositions the text can be discovered by relating commas and letters (reading vertically or horizontally). This is the case of Mettere al mondo il mondo (consisting of two or five elements), Immaginando tutto (two elements), I sei sensi (eleven elements), Il progressivo svanire della consuetudine. The same mechanism was applied to the “portraits” based on the names of friends and often consisting of whole families. Meanwhile he continued with the type of composition with words written in full at the top of the sheet, including ONONIMO, or dates written in words.

These inscriptions were chosen on various criteria: at times they were the titles of other kinds of works he did (Dare il tempo al tempo, Raddoppiare dimezzando). At times they were quotes, such as the mystical Sufi saying La notte dà luce alla notte (“The night gives light to the night”). The writing of these sentences in ballpoint, in a number of versions but all different in coloring and hatching, continued through the following years. In his Rome studio AB prepared the sheets for the ballpoints while his private research continued to be focused on squared paper, working on language squares and the transformation of sentences into “constellations” of commas.

In the periods spent in Kabul, he oversaw the work on the embroideries and at the same time at the One Hotel prepared his postal works, the drawings to be inserted in the envelopes and the permutations of stamps. The most challenging of the postal works produced in Afghanistan was definitely 720 lettere da Kabul. Prepared in autumn ’73, it consisted of 720 sheets prepared by AB, to be completed with a phrase in Farsi. Dastaghir was commissioned to write these phrases and then send them to Rome in the course of the long Afghan winter of ’73–’74.

“When the hotel business fell through because of the revolution and everything got eliminated, including hotels, my partner was there, with winter approaching, jobless and without a cent.
So I organized this colossal work and asked him to write a page a day during those months, putting down the events of his life, his childhood, memories, stories… I prepared it all, envelopes, stamps, a really long job. And then I gave him 720 sheets which I had stamped, using a rubber stamp I had made specially. It was the image of the number one thousand…”.

Besides the Mappe, in Afghanistan Boetti had the works Ordine e disordine embroidered, no longer as a single small tapestry but with a view to creating large composites made up of several pieces, all bearing the same phrase but in each case colored in different ways. (One composition was made up of forty-nine pieces and another of a hundred.) Other “small embroideries” followed in the years ahead.

“I drew about 150 sentences that could be arranged in squares… Today when I come across an expression like ‘la forza del centro’—a yoga precept—I know instinctively that the number of letters enables it to form a square.” 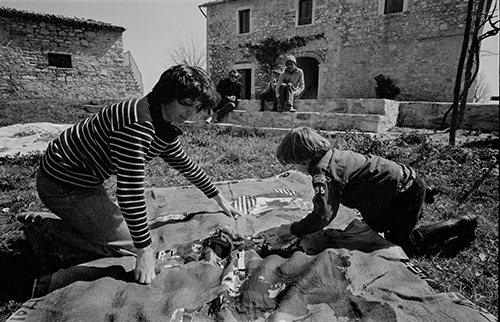 Alighiero Boetti looks at his Maps in the family in Todi, photo by Gianfranco Gorgoni, 1975

In late November “Contemporanea” opened in Rome, curated by Achille Bonito Oliva in the new car park at Villa Borghese. The works by Boetti on display were Ping Pong and Dodici forme dal 10 giugno 1967. Caroline Tisdall, in the London Arts Guardian, reviewed the exhibition as the “biggest ever mounted in Italy, with almost one hundred artists, a true challenge to Kassel.”

Of Boetti she wrote: “… Alighiero Boetti conveys the sense of the artist as a removed figure, somehow anonymous but observing and recording events in the ‘real world.’ One of his works on show is a series of etched copper plates: sections of maps. They are in fact the maps, one to a plate, of all the places in the world in which some political atrocity happened over a period of time a couple of years ago. So discreet is the use of material that the unmarked maps become shapes on a plate unless you know the circumstances in which they were done.” AB bought a house in the countryside not far from Todi in Umbria. It was to become his point of emotional and domestic stability, to compensate for the nomadic restlessness of his “twin” self.