On 16 February, the Marlborough Gallery in Rome presented “Alighiero e Boetti”: it exhibited Niente da vedere niente da nascondere (1969); 720 lettere dall’Afghanistan (1973–1974); a work in biro, Segno e disegno; Collo rotto braccia lunghe (1976) and the ink version of Gary Gilmore (1977). The artist’s attention was captured by violent deaths in the social context of the so-called “anni di piombo”: AB traced the outlines of various corpses among which Pasolini’s; also Gary Gilmore, who was under death sentence in the USA but asked for immediate execution, moved him particularly.

“For three days, using my left hand, I wrote out his interview, his last moments, when they forcibly put the hood on him, because they couldn’t look at him any more. He was my age.”

On the same occasion, at the Marlborough, he presented Orologio annuale (a GEM Montebello limited edition wristwatch issued in 200 numbered examples). He also began another ritual, rather like the Calendars begun in 1974, a new annual appointment with Contatore, a “time counter.” 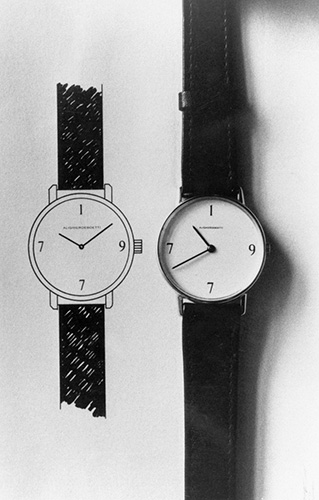 Between February and April, the Galerie Annemarie Verna in Zurich presented a solo exhibition divided into two parts. The invitation was a page in black and white with a detail from Gli anni della mia vita dating from ’75. The works exhibited in the first phase were the set of panels of the Insicuro noncurante portfolio and an unpublished drawing Vista dallo studio (a composition that eventually became Tracce del racconto in the group exhibition at San Remo the following December). The second part of the exhibition presented, on its own, the work in ballpoint pen, I sei sensi, on eleven sheets of blue paper.

At the same time, in Florence, the Galleria La Piramide Multimedia presented works by AB essentially on squared paper, including Autodisporsi and Alternando da uno a cento e viceversa. The artist commented on them in these words:

“I called up a boy in Milan and explained a system to him: take a hundred squares made up of a hundred smaller squares each and alternate one black square with two white squares and so on. He did this, sent me the sheet and the work was ended and at the same time begun. In this way I eliminated the problem of ‘quality’: whether this work is done by me, by you, by Picasso or by Ingres doesn’t matter. It’s the leveling of quality that interests me.”

The artist also arranged for an embroidered version to be made of the work. This was one of the phases of this arithmetical theme, and not the last.
AB was working with the designer Guido Fuga on the project for the Aerei triptych.

“There is a firm in Turin which sells a cheap four color print in strips of an exotic landscape. I’d like to do something similar. I want to get an assistant to draw a thousand airplanes on a sheet of paper with a dark blue ground, the color used for the sky in nativity crèches. The planes accurately drawn in all different perspectives, from different angles, so they look really stunning. It has to be explosive!”

On 31 March, he had a solo exhibition at the Galleria L’Ariete in Milan. The works included the two recent drawings Gary Gilmore e Collo rotto braccia lunghe, Alternando da uno a cento e viceversa (drawing on squared paper) and a postal work. In the adjacent room, Ariete-Grafica presented: Orologio annuale and the “edition” of two small embroideries (Per nuovi desideri and Udire tra le parole) made specially for the gallery. 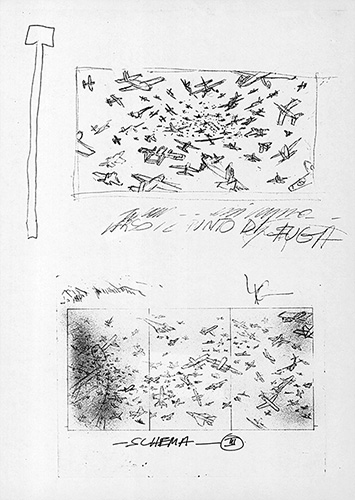 It should be noted that the term “edition” has a specific meaning in relation to AB: it is always a sequence of unique examples, which he himself called “single multiples” because they were executed by hand and inevitably with different features, from the colors to the single “hands.” This was true not only of the embroi- deries but also other types of works.
The Galleria L’Ariete also exhibited some examples of the poster Faccine printed in offset. The magazine Data (number 26) published the image full page with this caption: “Poster measuring 140 × 100 cm, published by the Multhipla in Milan, and printed in 5000 copies in black and white.

Some of these posters were then given to be colored to the children at the Casa del Sole school, and then exhibited in the gallery. The black and white posters on sale in the gallery cost 3000 liras, those colored by the children cost 5000 liras.” Other copies of the poster were then given to friends and collectors with the invitation to color the drawing.
In April, on AB’s eleventh visit to Afghanistan, he was accompanied for a month by his seven-year-old son Matteo.
On his return in May, he participated in the Turin group exhibition “Arte in Italia 1960–1977” curated by Barilli, Del Guercio, Menna, at the Galleria Civica d’Arte Moderna. He displayed Cimento dell’armonia e dell’invenzione. The work was not recent but perfectly aligned with the theme of the section curated by Renato Barilli, titled “From the Work to Involvement,” from the neo-Dada legacy down to Arte Povera and the beginnings of Italian conceptualism. Barilli wrote: “Boetti has already explored certain serial and combinatorial possibilities. However unlike the serial works of minimalist inspiration, his always entail intervention by others.” 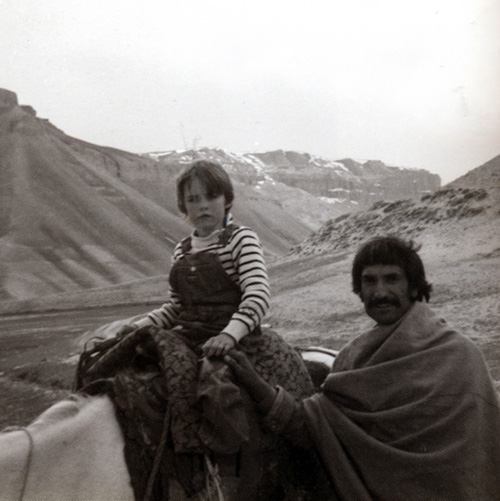 Matteo Boetti and Dastaghir in Afganistan, 1977

On 29 November, the Galleria Il Collezionista in Rome presented the triptych Aerei. The exhibition’s exact title was “Alighiero Boetti in collaboration with Guido Fuga designer.” The opening of the review by Maurizio di Puolo express the general amazement that the work elicited: “Hundreds of airplanes circling in three great blue skies. The gallery is empty and, in a brilliantly lit room, there’s only this absurd triptych, a blast of crazed brilliance. There’s no title and the authors are doubled, or rather trebled: Alighiero, Boetti and Fuga.”
The following year J.C. Ammann asked AB about the meaning of the work Aerei. He replied:

“I think I did it because today everything strikes me as simultaneous and at the same time superficial.”

In December, at the group exhibition “La traccia del racconto, 21 artisti italiani contemporanei” held in the Villa Comunale Ormond in Sanremo, AB presented Undici fogli Afgano-Etruschi (Le parole che uccidono) from 1976 and a second version of the drawing exhib- ited in Zurich in February under the title Vista dallo studio (from this time both works were titled Tracce del racconto). In the catalog Corinna Ferrari wrote of AB’s attitude to the vocabulary of art. “He seeks to counter habit with a subtle concern, an unprejudiced intuition, capable of reactivating the appearances of signs, and of grasping, through an uncommon logical system, the transitions, the openings by which signs create links with each other or change their register. I believe Alighiero’s partiality for maps, geographic and geometrical plates, and diagrams reflects the desire to identify privileged places in which to perform these semantic shifts.”