On 23 February, at the solo exhibition at the Salvatore Ala Gallery in New York, AB presented some essential works from the seventies, still unknown in the United States. They included 720 lettere dall’Afghanistan, with the related book of bound drawings (1973–1974), a diptych in blue ballpoint pen Mettere al mondo il mondo (1974), and the triptych Aerei (1977). He also repeated in a large format the concept of Mimetico, his readymade of 1966–1967, exhibiting one of the few examples produced in 1980–1981. 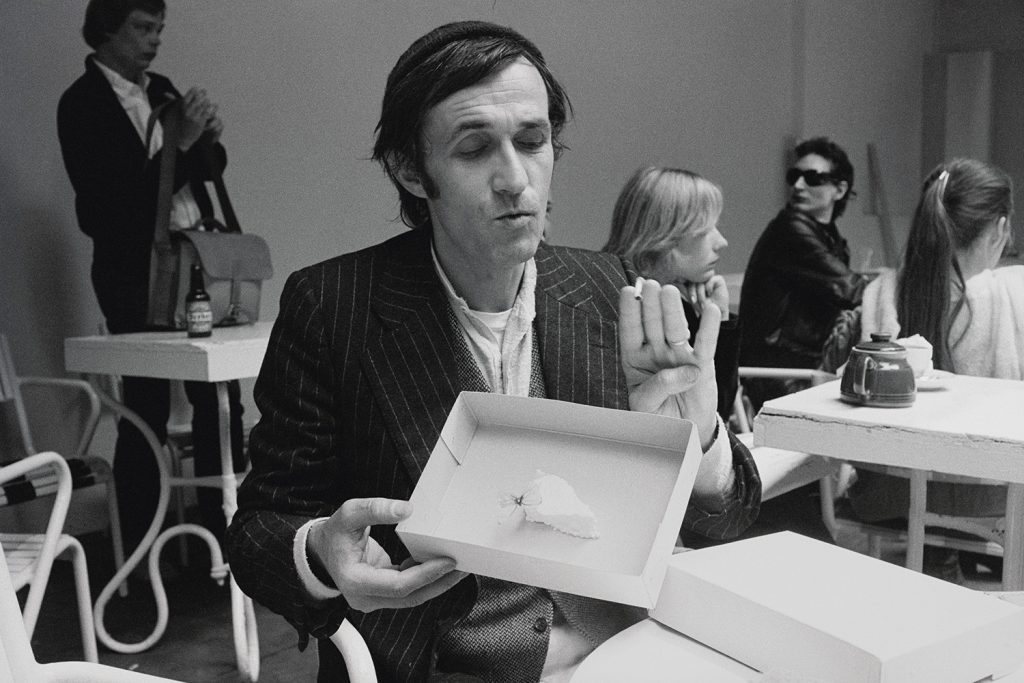 Spring passed emptily without his usual stay in Kabul. AB participated from a distance in two important group exhibitions, without attending the openings. On 8 May, the Hayward Gallery in London opened the group exhibition “Pier+Ocean, Construction in the Art of the Seventies,” curated by G. von Graevenitz. It was a very ambitious scholarly project that traced a history of Constructivism and concept of space from Mondrian.

The exhibition then ran from 13 July to 8 September at the Rijksmuseum in the Netherlands. After the optimism of the sixties, writes the curator, “The space of seventies art is an open space, to which the individual artwork relates as the pier does to the ocean.” Boetti was placed in the section “Opportunity System Endlessness,” with Baldessari, Darboven, On Kawara, LeWitt, Opalka and others, represented by the book Classifying the thousand longest rivers in the world and a Lavoro postale of 1974 in eight elements (four panels of envelopes with Italian stamps and four of drawings). From the title of this exhibition AB drew the inspiration for Molo o Pier Piet, a ballpoint drawing that plays on the gestalt effect of solid (pier) and void (ocean) and the pun on “pier” and “piet” (in homage to Piet Mondrian). 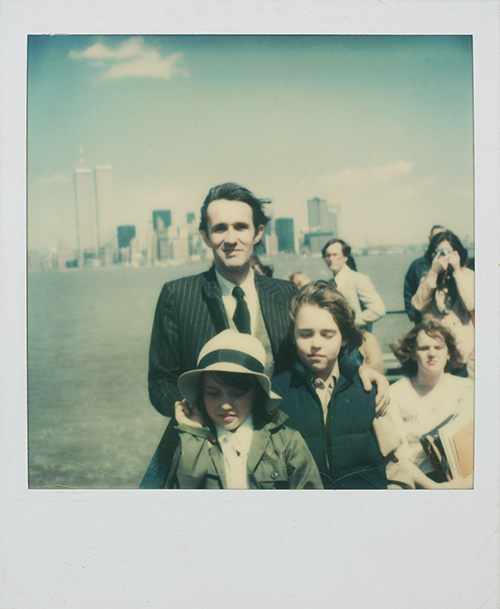 New York, Alighiero Boetti with his sons, Matteo and Agata

On 17 May, the group exhibition “Ut pictura poesis” opened at the Pinacoteca Comunale in Ravenna. Curated by Mirella Bandini and Italo Mussa it dealt with the theme of writing and the drawing of word. AB exhibited three works related to language, two of them from of the Arte Povera period, the two diptychs Rosso Gilera Rosso Guzzi of ’71 and 11 luglio 2023 16 dicembre 2040 of 1969 and a third belonging to his later conceptual output, Mettere al mondo il mondo, a diptych in blue ballpoint with a code to its interpretation which combined letters and commas.

The subsequent exhibitions focused on his latest works and in particular the years of the crucial transition from Arte Povera to pure conceptualism.
In June AB was invited to the 40th Venice Biennale. He exhibited the sculpture Io che prendo il sole a Torino il 19 gennaio 1969, his performance video shot by Gary Schum and presented at “Identifications” in 1970, and the large Mappa of 1971–1973.

A few days later, on 27 June, he went to Tokyo for a solo exhibition at the Art Agency, the leading Japanese gallery, which at that time had placed its television network at the service of the international avant-garde. In the previous months he had sent from Italy a series of postal parcels, 295 in all, based on an exponential increase. They were mounted in the gallery as a Lavoro postale produced specifically for this exhibition. They consisted of sixteen panels of envelopes and the drawings they contained. The series of stamps, envelopes and drawings rose in the last panel to sixty-four envelopes (8 × 8), the whole work consisting in 204 envelopes plus the 204 drawings inside them. 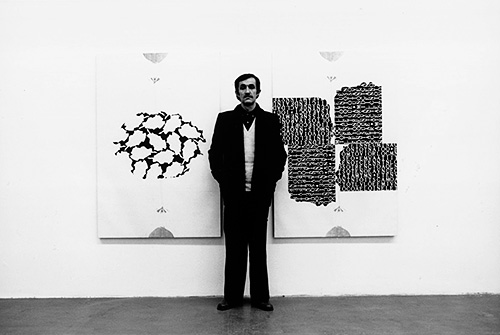 “The vital element of the work is the existence of order and disorder. There is an irony in order represented by the envelopes, with the graphic obliterations by the postal system, the marks left by rain when being passed from hand to hand… It represents an order invaded by the disorder of everyday life. This element of chance permeates the whole work.”

In addition to this monumental composition he exhibited an embroidery made up of one hundred pieces, all different, of the same one phrase Ammazzare il tempo.

“I’m not a painter, I’m an artist, so I use technical non-pictorial techniques. For example, in my postal works I use stamps for their colors and for the same reason I use threads in embroidery…. I have a great affinity for systems: the orderly system of human life in contrast with the disorder of nature is a contradiction that I always explore in my work.”

Apart from the Venice and Tokyo exhibitions, AB was rarely present at his exhibitions because his health was poor. His love of artificial paradises had reached the point where it strongly affected his life. His forced exclusion from Afghanistan was also related to reflections on the social context in Italy, in the ominous period of the late seventies. In his works on paper the images of death, massacres and war multiplied, taken from events reported in the papers. 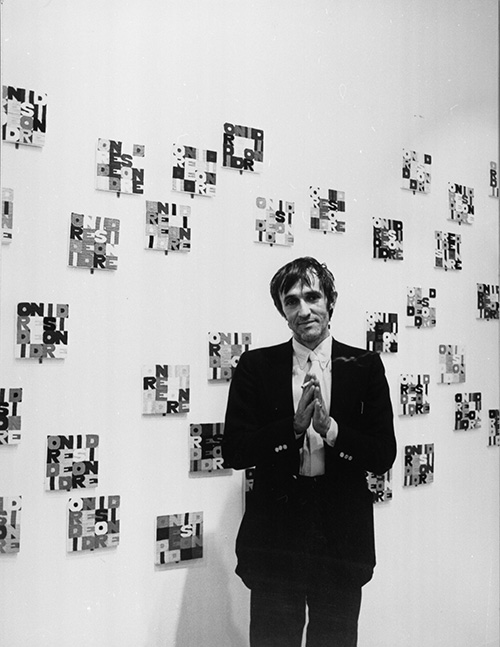 Alighiero Boetti in “Identité italienne” at the Center Georges Pompidou in Paris 1980, photo by Nanda Lanfranco

On 16 December 1980, he turned forty, with a certain melancholy, and yet the same day he enthusiastically began to work regularly for Il Manifesto, a daily. Every day Boetti contributed a signed image, symbol or drawing in black and white. He found black and white rotogravure paper and the serial medium fostered his natural gift for producing non-works, as he had tried to do with Gemelli and Manifesto in ’68. So on Tuesday, 16 December, the drawing Ordine Disordine appeared in the paper with a joint editorial by M. Notorianni and G.B. Salerno. The next day the drawing was Afghanistan. He contributed every day until Saturday, 24 April 1981. His last drawing presented four sentences set in a square. They read: “do a square,” “redo a square,” “redo it again,” “quit do squares.” On 20 December, at Massimo Minini’s Galleria Banco in Brescia he had a solo exhibition, “La natura, una faccenda ottusa.” The title (i.e. “Nature is a dull affair”) used the words of the English mathematician and philosopher A.N. Whitehead, the declared master of Gilles Deleuze. This concept underpinned a profound reflection by the artist on the disorderly proliferation of the various “realms.”

“Beginning in 1980 there is a series of my works on the theme of Nature is a dull affair. In them I wanted to present nature as without form or color, only a senseless hurrying towards life… It is the mental human gaze that seeks to find colors, scents, beauties…”. 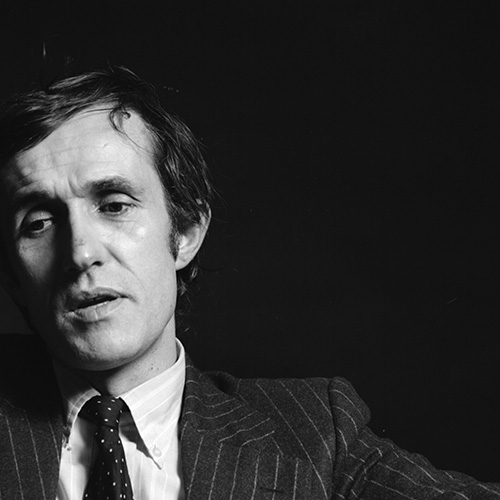 The specular structure Tra sé e sé formed the basis of four new colored compositions in mixed media (La natura una faccenda ottusa), as well as two other works in black and white: Le quattro operazioni and Afghanistan, where we read between the “twin poles”:

“Afghanistan, beloved country, where eighty-five thousand Russian soldiers who entered in December ’79 hold power. Alighiero and Boetti in the last sunny days of October in the year 1980 absent for more than a year.”