1979 was a year of mourning and personal instability. It began with the loss of his mother, Adelina Marchisio, on 2 March and ended with another loss, of the Afghanistan he loved, invaded by Soviet troops in December. Troubled by political developments in Kabul, as early as 17 February he sent himself in Rome a letter bearing a stamp with the new all red national flag. On his return he examined the possibility of now having his tapestries embroidered in Italy or Morocco, but nothing came of it. Meanwhile he arranged for the sewing of the large white embroidery titled Albero delle ore. 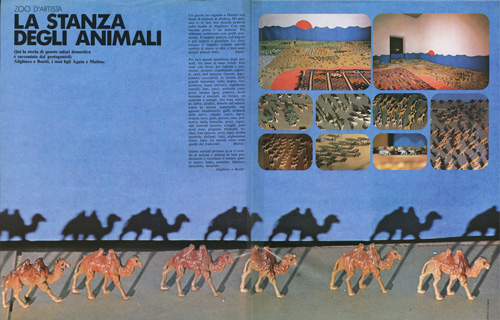 The One Hotel in Kabul had been closed for sometime. Dastaghir, the ex-manager had more or less disappeared. AB’s health deteriorated, as did his mood.
He participated without enthusiasm in numerous group exhibitions in Germany, the United States and at public galleries in Milan and Bologna, which surveyed conceptual art internationally.
“La festa dell’immaginario visivo,” curated by Tommaso Trini, opened on 5 May at Gavirate (Varese). This was a solo exhibition that deeply interested the artist and partly brought him out of his depression. On this occasion AB further developed what he called his “personal collective” works, done in collaboration with many ONONIMI (anonymous/homonyms).

As earlier for his solo exhibition at the Galleria L’Ariete, he got some local schoolchildren to color in the Faccine, reprinted in a new and smaller edition and partly already colored (unlike the earlier poster in ’77). Mayor Oldrini sent out a covering letter in January 1981 with the colored posters. He explained: “I am sending you 26 posters colored by the children in primary schools at Gavirate, Voltorre and Oltrona, on the occasion of the exhibition held at the cloister of Voltorre in 1979.”

The posters colored by the children had been exhibited in the portico of the cloister, together with the two original sheets of Faccine, previously colored by the artist and his daughter Agata on the 1977 offset print. In the exhibition the adult residents of the town were also involved in drawing the graphics of Alternando da uno a cento e viceversa. The letter they received from AB stated:

“You are one of a hundred citizens of Gavirate who have received this envelope. It contains a printed sheet of paper that represents the hundredth part of a big drawing… I hope you will decide to participate in this community work, which is also a project to be created in the future as a mosaic, or a tapestry to be woven, or the paving of a public area in Gavirate… I look forward to taking part together in the ‘festival of visual imagery’ and send you my cordial best wishes.”

Finally, among many other works, he exhibited Il Muro for the first time. This was a work begun in ’73, a collection of private “icons” subject to continuous additions and alterations.

“All these things used to hang on the wall of my home in Rome. They have been removed and hung up here in Gavirate. A photo of my son Matteo in Kabul… A piece of lace which spells out 1970, which, by a happy coincidence, has 49 letters, the square of 7… Classifications and hierarchies of rivers, seas, mountains and/or other things. Telegrams for blind people, only in America… Printed fabrics, a Persian silk-screen print,the postcard sent in ’68 with the twins A and B… The work of a Moroccan tailor, a portrait from ’69 done by Salvo, and one of his small oils on board, a drawing by Chia, by Tirelli, etc. etc. The desire to level and unify these forms, these different ways of doing things…”.

In September he spent his usual autumn period in Afghanistan, commissioning numerous embroideries, including some of the Mappe. This was to be his last visit and the works had to be air-freighted, in some cases arriving after many mishaps.
Before winter, working in his studio with his children Agata and Matteo, he prepared the “Animal Park” or Zoo, an easy-going, cheerful work, both orderly and disorderly. It was luckily captured by the photographer Giorgio Colombo and published in Casa Vogue in January 1980 with a description by AB himself:

“These animals bear within themselves the memory of millions and millions of their predecessors and remember time, ancient, slow, anonymous, identical, unmoving, unchanging.”

In autumn there were more exhibitions. In October, at the Galleria Plura in Milan, he presented an “edition” in forty copies and five artist’s proof copies of Nove Quadrati: nine watercolors fully painted by hand on watermarked paper specially produced by Rinaldo Rossi. Each sheet was therefore unique.
On 30 November, at Castello Colonna in Genazzano, there was the group exhibition “Le stanze” curated by Achille Bonito Oliva. AB showed two conceptual works from his Arte Povera period: Niente da vedere niente da nascondere from ’69, an impressive sculpture in iron and glass, and 1970, a delicate composition in filet lace. Both works were based on the same square format.

On 22 December, at the Stedelijk Museum in Amsterdam, at the survey of work by Gary Schum, the pioneer “video-curator,” AB presented a video documenting his two-handed writing performance, Giovediventiquattrosettembremillenovecentosettanta, shot by Gary Schum at the exhibition “Identifications 70.” The exhibition was repeated in 1980 in Rotterdam, Cologne, Ghent, Vancouver and Toronto.

This year, starting from the mirrored structure named Tra sé e sé, which began with Regno animale in 1978, AB started a sequence of works on paper using mixed media, collage, calligraphy and other techniques. The result was Regno musicale (dedicated to his mother), Regno delle carte and his composition which incorporated a “checkerboard” Alternando da uno a cento e viceversa, which contains the following comment, written in pencil with his left hand:

“AEB wrote thinking about a large pavement in an open, public place walking on slate and travertine—mathematical and fantastical—order and disorder with the eternal alternation between aeb and bea, a sort of ping-pong…”. 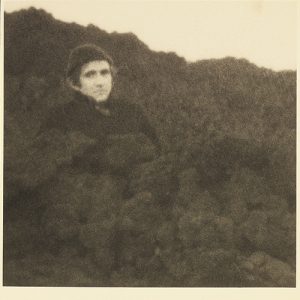 Together with the embroideries, the new works in ballpoint pen were conceived, developed and prepared by AB but always drawn by different hands. They were new phrases and compositions which, in addition to blue or black, used other ballpoint colors such as green and red: Sragionare in lungo e in largo, Talvolta luna talvolta sole, Uno nove sette nove, Normale Anormale. The same color variations (four industrial colors) were applied simultaneously to Aerei, with the hatching of the ground filled in with ballpoint pen.
In the last days of December, with the Soviet tanks occupying Kabul, AB spent a melancholy vacation with his family in a snow-covered Sicily.