The focus of AB’s interest continued to be on “private” works on paper, with the cheerful presence of a jungle of animals and the use of the technique of folded paper.
In February, the Galeries Liliane & Michel Durand-Dessert in Paris presented the group exhibition “Arte Povera 1965–1971”: AB was present together with all of the founding artists of the movement. On display were his Catasta of 1967 (made up of twelve elements), a large Mimetico of 1980, and the work titled Verso sud … dating from 1968, added on that occasion to the permanent collection of the Musée National d’Art Moderne, Centre Georges Pompidou.
If the emphasis of the group exhibition was on the sixties and seventies, the numerous solo exhibitions held the same year concentrated on his new works on paper, mostly stemming from his Japanese experience.

“And then there are the brushstrokes, laid on simply without any mastery, above all touches of red, it’s the first color… There is the Orient, but in this undifferentiated way of laying on all the colors together without ever mixing them, there is also the tradition, art and craftsmanship of Brazil, Guatemala, Peru, the Hopi, the Eskimos. It’s there that you find creativity is still common, not framed in roles and spaces the way it is among us.” 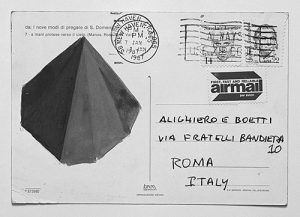 In February the Galleria Lucio Amelio in Naples pre- sented a memorable exhibition titled “Tra sé e sé,” referring to the mirror image of the artist’s head and hands, presented in black and white in the seventies and here reprised in colored India ink, abstract motifs and calligraphy. The gallery-owner was a friend of Boetti’s and for him he produced these eleven large drawings (150 × 100 cm), which were all reproduced as full-page plates in the splendid catalog in the gallery’s typical format.

In Milan, two important exhibitions opened on the same day (25 March). The exhibition at the Studio Casoli presented only works on paper, all done in Osaka on folded paper with Enamoto San. They included the works related to the different names of winds, Undici parole sparse nel vento and the large diptych Ordine e Disordine, executed in ideograms, the Oriental response to Boetti’s binomial square Ordine e disordine. Speaking of the calligrapher’s gesture on the still fold- ed paper, AB told Sandro Lombardi in the conversation cited above:

“The culminating moment of the whole operation remains the execution of the ideogram, which is always traced in a single movement, and the brush, which at the beginning is laden with ink, is almost dry by the end.”

The second exhibition at the Galleria Christian Stein was notable above all for two impressive friezes (150 × 700 cm), each made up seven elements. In the lower part, rows of monkeys chasing each other are drawn in different colors, while in the upper part, almost monochromatic, run drawings and collages made up of postcards, newspaper clippings, and calligraphy.

“These small forms that I make out of paper clippings are modules to be used rapidly, lightly, as I believe painters did under the Roman empire, when they probably used templates. The important thing, which also becomes happiness, is to define a form. You choose a monkey dancing or a panther and invent the image using quite simple manual means. You can reproduce it. This and the alchemy that makes happiness visible.” 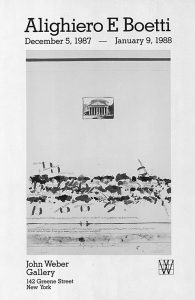 In May he had an exhibition at the Galleria Alessandra Bonomo in Rome. For the occasion AB prepared a pasteboard invitation bearing Alessandra’s name split up as if by a reopened fold, on the model of the ideograms he had done with Enamoto.
In the middle of August the Städtische Kunsthalle in Düsseldorf presented the group exhibition “Similia Dissimilia, Modes of Abstraction,” curated by Rainer Crone. In fall the exhibition was then presented at three venues in New York: the Wallach Fine Arts Center of Columbia University, the Leo Castelli Gallery and the Sonnabend Gallery. Boetti exhibited works from the Arte Povera period (Sedia, Colonne e Colori) together with a work on paper from ’87 (Tra sé e sé). In the catalog the curator John B. Ravenal concluded his critique of the artist by observing, “Boetti undermines the tyranny of coherence by inserting fissures and paradoxes in our perceptual habits…”.

On 5 December, in New York, the John Weber Gallery presented a solo exhibition with eleven versions of Tra sé e sé, all from 1987, a drawing in mixed media titled Via del Pantheon 57, the image used on the invitation, and two long friezes based on a collage of Cartoline astratte and Cartoline etrusche e altre.
At the year’s end a small but valuable exhibition opened at the Galleria In Arco in Turin. Titled “Giacomo Balla Alighiero e Boetti,” it presented works on paper. The invitation bore a haiku by Boetti:

“Opposites annul, intermediates soothe and neighbors repel each other: but what does a leaf do on the ground?”

One of the collages on display had the following:

“The natural parity of comparison.”