There were two outstanding exhibitions this year. Though AB was unfortunately unable to be present, he supervised and arranged them.

On 17 February, “Origine et destination, Alighiero e Boetti – Martin Hübler” opened at the Palais des Beaux-Arts in Brussels, curated by Marianne van Leeuw and Annas Pontégnie. The exhibition, a dialog between two founders of international conceptual art, included an interactive work involving the public, using a mechanism for the selection of photocopied images that recalled Boetti’s practice with his “red books.” The artist was unable to attend the event.
In spring Caterina Boetti traveled to Peshawar to collect the large Mappa with the Russian flag corrected after the fall of the Berlin wall. 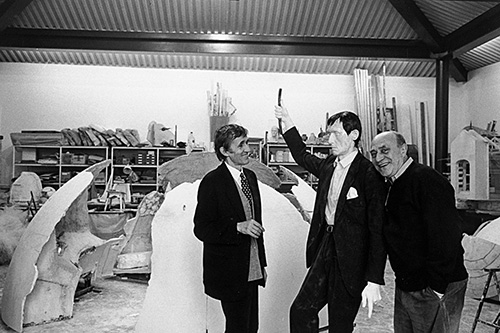 On 24 April 1994, AB died in his home on Via del Teatro Pace in Rome.
On 5 May, the Lavoro postale moved from Grenoble to the Musée de la Poste in Paris, with the presentation of the second catalog edited by Angela Vettese.
On 7 August, in Los Angeles, the MOCA Museum repeated the installation of fifty khilim in “Alternating from 1 to 100 and vice versa,” curated by Alma Ruiz and Thierry Ollat (a collaborator of Adelina von Furstenberg). The exhibition then moved to the P.S.1 in New York, where it opened on 9 October.

In New York the autumn was transformed suddenly into a posthumous celebration of AB’s work, presented simultaneously at four exhibitions inaugurated between 4 and 9 October: not only in “Worlds Envisioned,” the joint exhibition with the other “Magicien de la Terre,” Frédéric Bruly-Bouabré, at the DIA Foundation and the solo exhibition at the P.S.1 Museum on Long Island, but also at two prestigious group exhibitions: “Mapping” at the MoMA and “The Italian Metamorphosis” at the Solomon Guggenheim Museum.

In the catalog of “Worlds Envisioned,” among the twelve artists involved, his son Matteo wrote: “A few days before moving to Paradise, Alighiero told me yet again how happy he was to be having this exhibition with Bruly, his African brother… He was fascinated by the comparison with him, so distant geographically, so unique in his relationship with the sacred, with the mystery. Here they were today, more different than even from each other, the black medicine man, alive, and the white medicine man, that shaman-showman, now probably above the Afghan lakes in the country he so much loved. But they had in common a special respect for invention and intelligence, the same generosity in the speech, in action, in revealing beauty and its mechanisms.”