The year was notable for numerous journeys and proved very productive. AB made an exploratory journey to Peshawar in Pakistan on the Afghan border, to check out the potential for resuming production of the embroideries there. The Afghan merchant Jalil, an acquaintance of his, helped find possible embroiderers among families that had fled from Afghanistan after the Soviet occupation. The first embroideries from Peshawar were only completed in 1988. Meanwhile the embroideries still being made in occupied Afghanistan were exhibited at various solo exhibitions in Italy. They included “Ammazzare il tempo” at the Galleria Chisel in Genoa and “Arazzi maggio uno nove otto cinque” at the Galleria Bonomo in Bari. 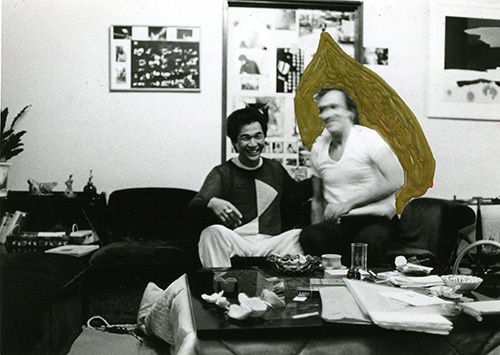 Boetti in Japan with the calligraphy Enomoto, 1985, photo by Alessandra Bonomo, «retouched» by Mario Schifano

In May, for the “Incontri internazionali d’arte” at the Palazzo Taverna in Rome, AB presented the sequence Anno 1984: 216 magazines covers (eighteen for each of the twelve months), arranged on twelve large panels, reduced to uniformity by the black and white of pencil drawing.
He made other journeys, for example to Tanzania, where he stayed on the island of Zanzibar. As always on journeys to distant places, he composed a number of postal works on the spot and mailed them.
He made his second visit to Japan, intended to coincide with an exhibition at the Watari Gallery in Tokyo. It was canceled at the last moment because of disagreement over the theme of the exhibition.

On this occasion he had the pleasure of again meeting up with the dealer Kazuo Akao, who had welcomed him to Tokyo five years before. Akao’s Art Agency no longer existed but the collector and dealer welcomed AB to his private museum in Osaka. (His collection consisted of ancient art with the exception of three contemporary artists: On Kawara, Beuys and Boetti.) There AB was able to work with a master calligrapher, Enamoto San. 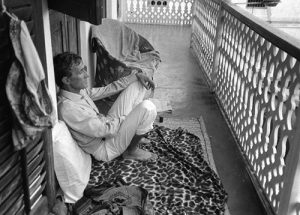 “I wished to work with the Japanese calligrapher on the concept and the word ‘wind.’ Together we did some pictures on it. There are scores of ways of writing “wind” in Japanese… We chose a couple and then prepared the paper on which they were to be traced. It consisted of a series of folds, regular, irregular, horizontal, vertical, fan-shaped, etc. After folding the paper, he would trace the chosen ideogram on it. When the ink dried, the paper was unfolded and then glued to a support. The result was the decomposition of the initial ideogram. It was only when the work was completed that I realized that strangely enough I had gone to do a work on folds in the country of the fan. To Enamoto it was like drawing on a closed fan, which on being opened decomposed the image, while in Japan normally the procedure is the opposite: they paint on an open fan and then close it to conceal the image, folding it on itself.”

As a result of this meeting AB, who already had a passion for Japanese culture and Zen in particular, learned specific new techniques of working with paper, such as folding, which became a new element of composition together with calligraphy, drawing in pencil and in colored inks, and the stamping of red seals. (He had a seal made with his name in Japanese characters.) The influence of master calligrapher Enamoto can be seen even in his penning of hand-written notes and the titles of works. 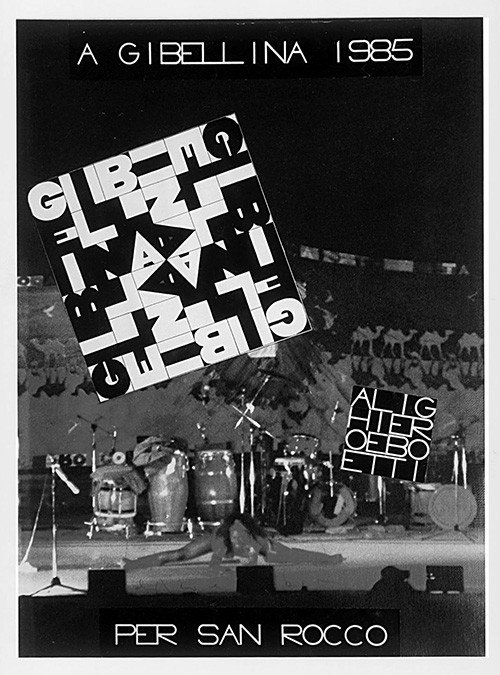 In the August holidays, AB had a processional banner sewn for “Lu presente,” the festival of Saint Roch in Gibellina (Sicily). It was over 2 meters high and 10 long, and was sewn by the women of the village. During the year AB also participated in important group exhibitions, mainly abroad. In Madrid (from January to April) and New York (at P.S.1, from October to December), his works were presented in two important exhibitions devoted to Arte Povera, both curated by Germano Celant: “Del Arte Povera a 1985” and “The Knot. Arte Povera at P.S.1.” Between September and October AB was also represented at Kassel (in a group show at the Kunstverein) and the Alvar Aalto Museum.

In December, at the Castello di Rivoli in Turin, AB took part in an exhibition commemorating the activities of Turin’s Museo Sperimentale in the sixties.
All these exhibitions confirmed the process, now widespread, of historicizing Arte Povera by displaying its subsequent and highly diverse development in the works of the founding group of artists.