In February, the Nouveau Musée of Lyon-Villeurbanne mounted a major anthological exhibition of over fifty works, organized by AB in collaboration with Giovan Battista Salerno. The title, “Alighiero e Boetti. Insicuro noncurante,” came from the 1976 portfolio. It consisted of the same systematic documentation of techniques and reviewing of the essential stages of the work done to date. 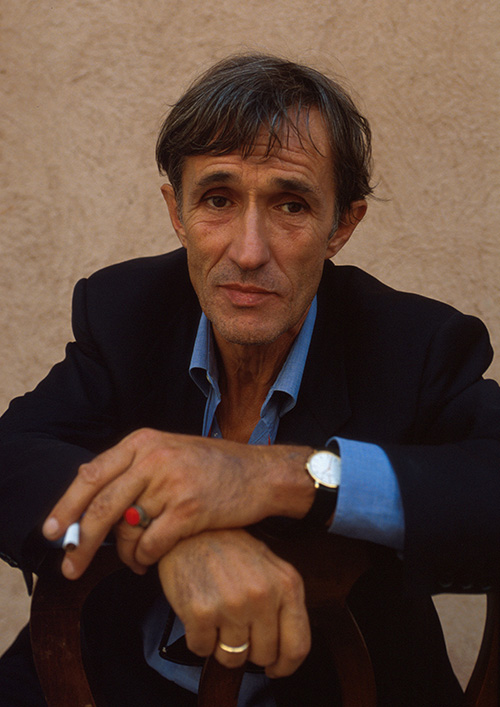 Alighiero Boetti at the Venice Biennale, 1986, photo by Graziano Arici

For the occasion Boetti produced and exhibited new versions of three works from the Arte Povera period: Pavimento, Rotolo and Niente da vedere niente da nascondere. On the cover of the exhibition catalog (a witty photo of AB concealed in the midst of a throng of Japanese students), Salerno published, next to images of individual works, the start of a glossary titled Manuale di conoscenza, intended to become a developing text on all AB’s work, but it remained unfinished.
The exhibition was reprised, with the same title in Italian but with some variants in the works exhibited, at Villa Arson in Nice and at the Stedelijk van Abbemuseum in Eindhoven. 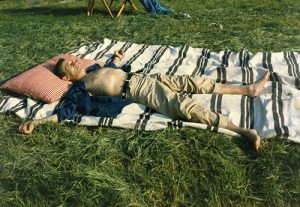 In April and May Boetti had two solo exhibitions where he presented numerous works on paper that exemplify the “Japanese” spirit of this period, distinguished by rapid red or blue lines made in India ink. They were “ALIGHIERO E BOETTI” at the Galerie Pietro Sparta in Chagny and “Esercizi 1986” at the Galerie Susan Wyss in Zurich.
In the drawings, as always, words and lines are interlaced. Running through the works exhibited were texts like:

“Going against time and against wind and feeling the profile of the wind; going with time present without the poisons of the past, without the honey of the future.”
“Alighiero e Boetti in the limpid, clear bright and long-awaited spring of the year 1986 here in Rome thinking about the gardens of the Orient and time of the Orient.” 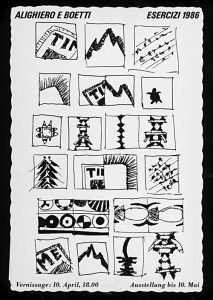 Boetti took part for the third time in the Venice Biennale, now in its 42nd edition. He was represented in the exhibition “Arte e Scienza,” curated by Maurizio Calvesi, with a selection of works from the sixties and seventies, including Gemelli (1968), a ballpoint titled 1974 and a 1977 example of Orologio annuale.
In summer AB took on a highly qualified assistant, the young scholar Massimo Minninni, commissioned to supervise the organization of exhibitions and bring order into the documentation of the works. A difficult task…

“AB would make sales without keeping any documentation, he rarely called the photographer except at the insistence of the gallery managers before exhibitions so as to print the catalog. The photos taken in his studio or at exhibitions were solely due to the initiative of photographers, particularly Giorgio Colombo. Being very generous, AB used to give away sketches, drawings and photographs. I soon had to give up documenting his work, meaning keeping a proper archive of photographs, catalogs and reviews.”
At the end of the year AB exhibited Contatore (1966) in the group exhibition “Il Cangiante,” curated by Corrado Levi at the PAC in Milan. 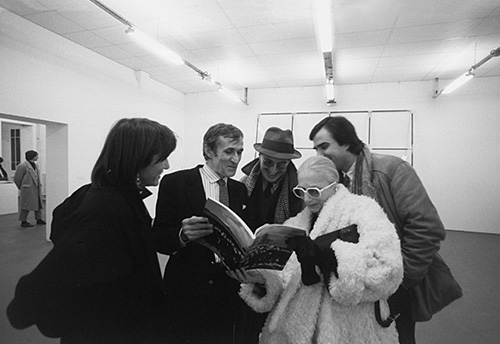