In 1988 Boetti began to have the embroideries sewn in Peshawar (Pakistan) by immigrant Afghan families: not only small embroideries, but mainly large tapestries with lettering. (Boetti invented some new phrases, like Talvolta luna talvolta sole). Many of these new embroideries, all designed in his studio near the Pantheon with his assistants, were produced in the following two years. In assembling his word squares in checkerboard or other patterns, AB almost always included texts in Farsi, written in Pakistan by the heads of the families or regular calligraphers (never by the women, for various local social reasons). 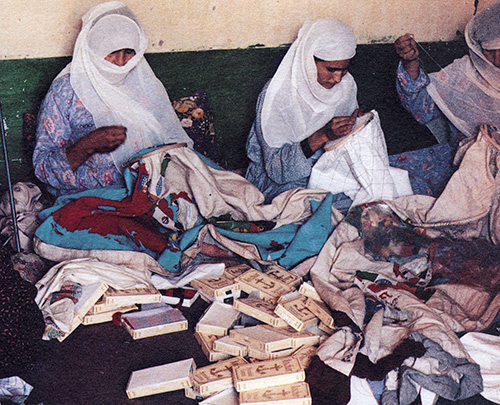 The inscriptions sometimes express a spontaneous lyricism, at times heartfelt militant appeals: “White doves weep for Mahdi Ali and take flight, men pray for him. And look at the garden covered in red roses – Written by Sober”; or again: “Embroidered by Ali Ghiero Boetti assisted by Abdul Afghan Jalil, Peshawar, calligraphy by Mohammed Yasin. I will not stop fighting until I reach the goal. Many Muslim mujahidin have lost their lives like so many butterflies on the front, they have resisted the brutality of the cruel Russians.”

It should be observed that even when new embroideries were made in Peshawar, in particular of Mappe with a new cartographic projection and flags updated following the political conflicts of the eighties, AB continued across the uncertain boundaries between Pakistan and Afghanistan to commission work from families still in the country. This is shown by other embroidered inscriptions, such as “Jagori Afghanistan 1989.” On almost all the embroideries made in Pakistan, AB would write next to his signature “a [i.e. in] Peshawar by Afghan People” or, in the inscription embroidered along the edges, statements like, “In Peshawar in Pakistan AEB had this embroidered by unknown Afghan women in the spring of 1989,” or variants. 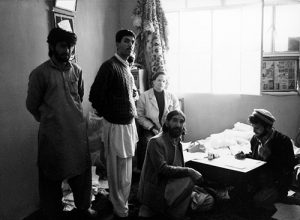 The collaborator Massimo Mininni with the Sufi master Barang and his assistants, Peshawar Pakistan, courtesy of Alighiero Boetti Archive

The series of works titled 50+1 have a different structure and are of special importance. They are a sequence of tapestry squares in which AB’s text is interwoven with poems by Sufi Barang, works exhibited in Paris the following year at “Les magiciens de la terre.” All Boetti’s solo exhibitions this year underscored the continuity between his art in the seventies and his recent works (ballpoints, embroideries and drawings on paper). Of particular interest were two exhibitions held in Milan: “Alighiero Boetti – opere 1968–1981” at the Galleria Massimo de Carlo and “Alighiero e Boetti. ‘ALTERNANDO…’ tra tecniche diverse 1970–1986” at the Galleria di Porta Ticinese.

It presented the conceptual mechanism behind Alternando da uno a cento e viceversa from the first experiment embroidered in black/ white on squared paper down to the works on paper.
The group exhibitions were historical in character and placed AB’s work beside that of the great masters of the twentieth century. In April Luigi Meneghelli curated “20 anni fa” for the Galleria Studio la Città di Verona. It was repeated in Rome at Giuliana de Crescenzo’s Studio d’Arte Contemporanea. The group exhibition presented works by Colla, Fontana, Leoncillo, Novelli, Pascali, Arico, AB, Gilardi, Paolini and Pistoletto. Boetti was represented by the five Colonne of paper and a stucco on wood. 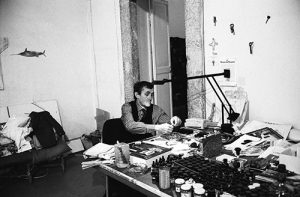 AB in his studio at the Pantheon, photo by Giorgio Colombo

In June, the Castello Estense di Mesola presented “Mosaico e mosaicisti,” curated by Laura Gavioli. The group exhibition presented works from across the whole twentieth century, ranging from Severini to Afro and Sironi to Schifano. Boetti exhibited a large mosaic iconographically related to the friezes of animals and stylistically to the classical mosaic tradition.

As for group exhibitions abroad, in addition to those in Cambridge, Athens and Nantes, “Chamber Sculptures,” organized by the United Nations, was of particular significance. It was subsequently presented at the Museum van Hedendaagse Kunst in Utrecht, then at the Palais des Nations Unies in Geneva and the Fisher Gallery at the University of Southern California. Towards the year’s end, in Rome a notable solo exhibition titled “Piopermariemonti” opened on 20 December at the Galleria Pio Monti. It presented a series of embroidered squares specially worked with the sixteen letters in “Pio per mari e monti.” 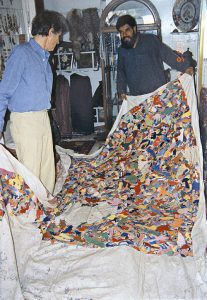 The catalog, edited by Achille Bonito Oliva, took the form of an ironic “collective work”: it matched the “portrait” of each embroidery, differing from the others in the pattern of its colors and execution, with the photographic portrait of its buyer.

“I designed some 150 words that could be arranged in a square. Today when I come across expressions like ‘la forza del centro’ (‘the force of the center’), a yoga precept, I know intuitively that the number of its letters allows it to form a square. I produced up to a hundred examples of each of these pieces. Each one is different in coloring and the special style of the woman who made it. So it is neither an original work nor a multiple.”

AB purchased a new home in Rome on Via di Teatro Pace. He moved in after restoring it in 1989, while keeping his studio at the Pantheon.