The busy rhythms of work in the previous years, when AB produced drawings on paper while delegating embroideries and ballpoints to others, gave way to a period mainly of promotion and exhibitions. He was represented at various important solo and group shows, above all in Europe. 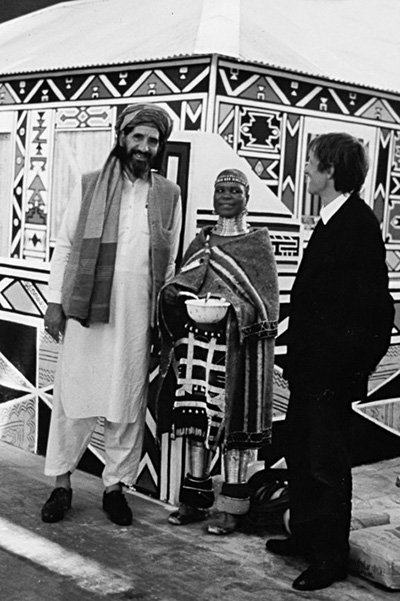 On 12 January, in Brussels, at the Galerie Lucien Bilinelli: opening of the solo exhibition “Alighiero e Boetti” with a number of embroideries of large dimensions (principally those with structured cruciform inscriptions in black and white) and Tutto, a series also now made in Peshawar.
For the occasion, the artist wrote the gallery owner:

“Dear Lucien, to avoid dispelling my efforts and diluting myself I need to keep still and then set off again to new places and feel the wind separated by the tip of my nose and then my cheekbones and ears and the hiss growing stronger and then fading in the distance and being dispelled and diluted.”

On 21 March, the Edward Totah Gallery in London presented a solo exhibition titled “Alighiero e Boetti,” with particular prominence being given to the polyptych Cartoline astratte, made up of nine colorful sheets. 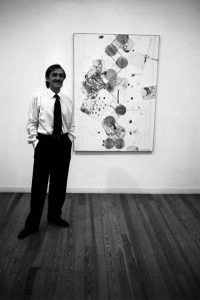 AB at the opening of the staff at the Toselli Gallery in Milan, courtesy of Archivio Alighiero Boetti

On 8 June, the Galleria Toselli in Milan opened “Cieli ad Alta Quota,” a wide-ranging survey presenting works going back to the seventies. It included the new cycle of works that gave the exhibition its title: Aerei on drawing paper, executed in pencil and watercolor by Guido Fuga, who had partnered Boetti in the conception of the first triptych in ’77. These Cieli ad alta quota were extremely refined compositions, each quite different from the others.

“Cieli ad Alta Quota [High Skies], a space where the void begins, where parallels meet and get to know each other for the first time, where colors are pulverized and the lack of oxygen favors extraordinary encounters and celestial visions.”

Among this year’s group exhibitions, on 20 January the PAC in Milan mounted “Verso l’Arte Povera. Momenti e aspetti degli anni ’60 in Italia.” It included three early pieces by Botetti (Zig Zag , Ping Pong and Io che prendo il sole a Torino il 19 gennaio 1969). The traveling exhibition continued to Lyon, where it was presented in the Espace Lyonnais d’Art Contemporain. Paris in May saw the opening of the historic exhibition “Les Magiciens de la terre,” conceived and curated by Jean-Hubert Martin, at the Centre Georges Pompidou and the Grande Halle della Villette. 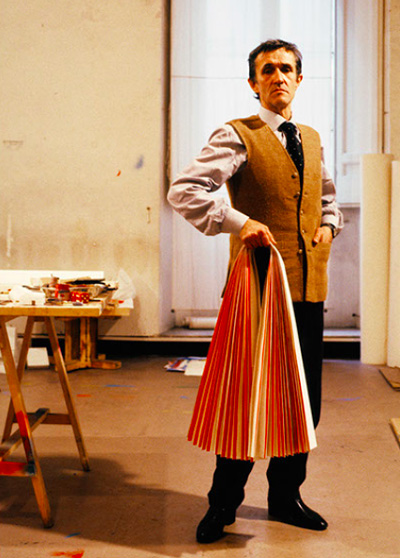 AB with his pleated paper in the Pantheon studio, photo by Randi Malkin Steinberger

It was the first exhibition of contemporary art that sought to be global in scope. A hundred artists were chosen, from very different cultures, so that AB was brought into direct contact with artists representing traditions outside Western culture and with types of works ranging from craftsmanship to sacred ritual. He exhibited 51+1, fifty-one large square embroideries— a roomful—in which his Italian texts were combined with texts in Persian by Sufi Barang, who came from Pakistan specially for the opening. It was on this occasion that André Magnin, Jean-Hubert Martin’s assistant, noting the subtle affinity between AB’s poetic and that of the African Bruly-Bouabré, initiated a project involving them both at the Dia Center for the Arts, New York in 1994.

“Would art be as arbitrary and reductive as any other kind of grid imposed on reality? Boetti answers by relating nomadism to the modes of representation and existence. Anticipating the theories of the Transavanguardia, he develops a true ‘eulogy of flight’ and geographical movement, continually regenerating his inspiration by contact with other cultures. Boetti remains elusive: when he took part in the exhibition ‘Les Magiciens de la Terre’ he arrived at the opening with one of his friends, a Sufi poet, silent, at his side… And by the way, where is Boetti at this moment?” 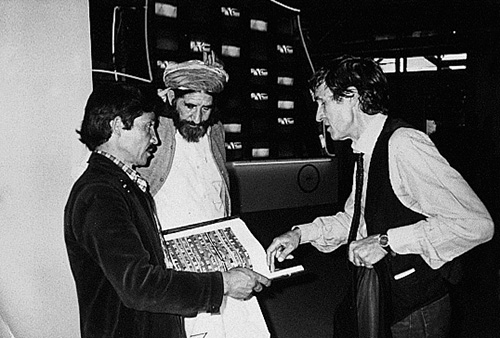 AB with Salman Ali and Sufi Barang at the inauguration of “The Magics of the Lands” in Paris, photo by Agata Boetti

In November the group exhibition “Art conceptuel, une perspective,” curated by Benjamin Buchloh and Seth Sigelaub, was held at the Musée de la Ville de Paris. The exhibition included conceptual works, and the critics chose thirty-eight artists, among them Anselmo, Boetti, Manzoni and Prini from Italy. AB exhibited two works: a 1984 reprise of the diptych Rosso Gilera Rosso Guzzi (conceived in ’67) and the immense black/white embroidery of I Mille Fiumi più lunghi del mondo (280 × 420 cm) presented in Ravenna in ’84.