On 16 February, his second solo exhibition “Alighiero e Boetti,” opened at the Galleria Lucio Amelio in Naples, with a long frieze “populated by a colorful fauna of rhinoceroses, panthers, his beloved dolphins, swordfish and monkeys. The greatest pleasure in the world is to invent the world as it is without inventing anything.” 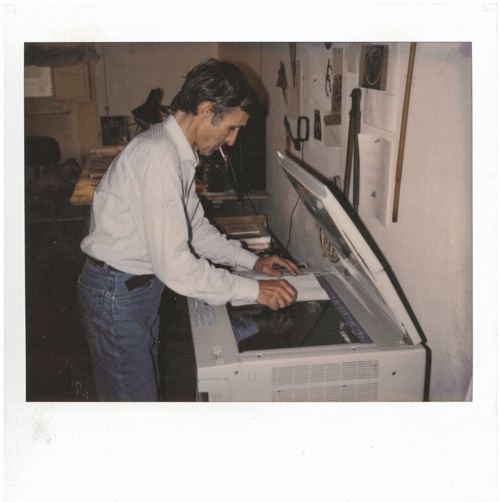 The catalog had the same large format with colored plates as the one published in 1987. After the recent important exhibitions at the Centre Georges Pompidou and the Musée de la Ville de Paris, there followed a busy period with exhibitions in Parisian galleries.
On 6 March, the solo exhibition “Alighiero e Boetti” at the Galerie Adrien Thomas presented two large compositions in ballpoint pen: Uno Nove Otto Otto made up of four elements (1988) and Mettere al mondo il mondo of twelve elements (1978), a Mappa from 1983, a Tutto and a number of large Ricami di lettere, in which the Persian alphabet was interwoven with the Italian. 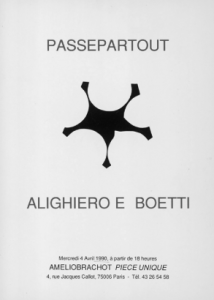 On 24 March, the Galerie Charles Cartwright mounted another solo exhibition. It exhibited Anno 1988, a work consisting of 144 magazine covers redrawn in pencil in black and white (twelve for each month of the year). The young gallery owner had a fine catalog printed with the 144 images, but AB banned publication because of a serious error: the reproductions were not ordered chronologically.
On 4 April, in Lucio Amelio’s new Parisian gallery (Pièce Unique, Galerie Amelio-Brachot), AB covered the whole available floor with a mosaic (380 × 415 cm), which reprised a drawing from ’72 titled Passepartout. The mosaic was laid by the cooperative of mosaicists based in Ravenna who had produced works in 1988 exhibited at the Castello Estense of Mesola in “Mosaico e mosaicisti.”

AB intended to produce at least two more mosaics: Direzioni Suggerite (a re-elaboration of Regno animale), for which the preliminary cartoon exists, and Tutto, for which only a small model survives. They were never made.
In the case of Direzione Suggerite, AB showed Mariuccia Casadio the plan for a large cultural center in Ravenna and explained:

“The mosaic will measure 10 m × 10 and is titled Direzioni Suggerite. Seventeen lines will indicate seventeen different directions… Each line has three characteristics that make it possible to follow it: writing…, the lines of animals (there is the line of the slug and the line of the horse…), and then colors corresponding to each animal.” 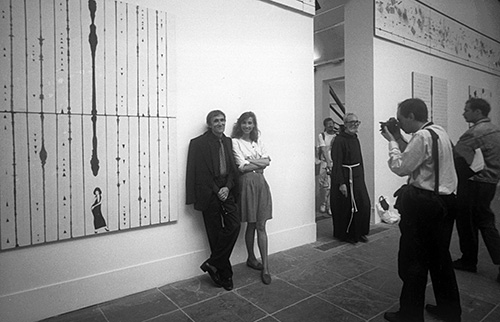 Ab with Caterina Raganelli at the Venice Biennale in the Personal Room, photo by Giorgio Colombo

AB also revealed he was deeply interested in artistic projects of this kind, as well as educational projects:

“I feel that in this period things are becoming feasible that I theorized twenty years ago and seemed impossible at the time… Environmental things, educational things, for outdoor spaces or other projects of the type have always attracted me. I had planned a playground, children’s books, objects, a thousand other things.”

Now prominent on the Parisian scene and again enchanted by the city where he had enjoyed living almost thirty years before, he made his home in Saint-Germain-des-Près.
At the same time, in Rome (on 8 March) the Galleria Pio Monti presented a long animal frieze, installed on the upper part of its walls, forming a decorative festoon. 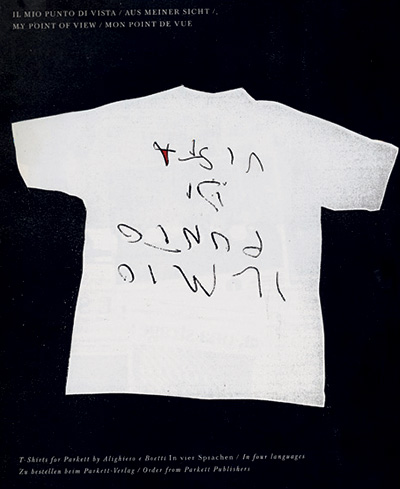 AB also participated in the 44th edition of the Venice Biennale, with a personal room in the Italian pavilion curated by L. Cherubini, F. Baldoni and L. Vergine. He exhibited a continuous frieze that ran along the walls for 54 meters. In the lower part of the wall he presented ten other large works on paper. On this occasion he was awarded the Jury’s special Prize. In September he married Caterina Raganelli.

On 21 September, AB included his work in the traveling group exhibition “Le porte dell’oriente.” It traveled from Istanbul to Ankara and Athens, with its last venue in Ravenna a year later. Again on the theme of the East, he took part in another group exhibition held at Palazzo Reale in Milan titled “Il mondo delle torri di Babilonia.”
On 8 October, the Galerie 1900-2000 in Paris presented his work in “Art Conceptuel, Formes Conceptuelles,” a group exhibition of forty progenitors of the conceptual movement, from Vito Acconci to Lawrence Weiner. An impressive catalog documented the exhibition. 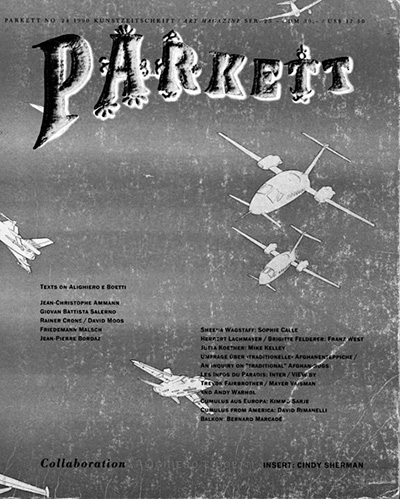 Again in October, AB was among the artists represented at the Musée Contini in Marseille. The exhibition, curated by Bernard Blistène, turned on the Arte Povera section of the permanent collection of the Centre Georges Pompidou, Musée National d’Art Moderne. It presented the works already exhibited in Paris in April: a calligraphy in fast-setting cement dating from ’68 titled Verso Sud, a Mappa from ’73 and a work in ballpoint.

On 17 November, Salvatore Ala in New York presented “Alighiero e Boetti,” a true anthological exhibition starting from the Arte Povera period, passing through the archetypes of the conceptual period (a vast postal work, the ballpoint Mettere al mondo il mondo and the large triptych of Aerei in watercolor) and some especially significant embroideries such as Ordine e Disordine, a Mappa of ’74 in a hundred embroideries and a monochrome embroidery from ’89. 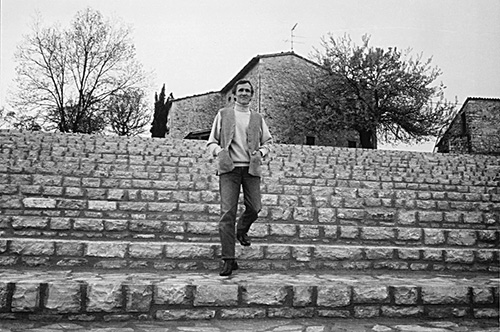 In spring AB collaborated with the Zurich-based magazine Parkett, or rather with its editors Jacqueline Burckhardt and Bice Curiger on the layout of eighty- eight pages (plus the cover) devoted to his work in number 24 for June. The issue was made up of previously unpublished texts—by J.-C. Ammann, G.B. Salerno, R. Crone/D. Moos, F. Malsch, J.-P. Bordaz— and over thirty reproductions of works, constituting almost a personal exhibition catalog. Parkett was also the publisher of a silkscreen print, All about twins (a cover of Newsweek redesigned) and a T-shirt Il mio punto di vista (in various languages).